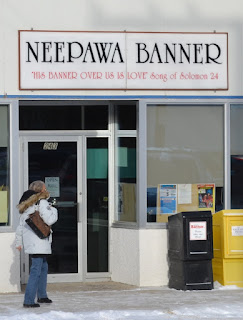 by Larry Powell  NEEPAWA, MANITOBA: Do you ever wonder why so many people of faith, especially on the Christian right, still deny the science of climate change? There was yet another example of this in Ken Waddell's editorial, "Assessing change," before Christmas. It appeared in his newspaper, "The Neepawa (MB) Banner." As we all know, Ken has been a respected leader in our community for a long time, in journalism, politics and religion, sometimes adorning his articles with passages from the Bible. In his editorial, he refuses to accept the conclusion now long endorsed by an overwhelming consensus of scientists - that  the burning of fossil fuel by we humans is the major culprit behind our planetary climate crisis.  He even calls the federal and provincial governments "certifiably nuts" for the ways in which they've embraced the recent Paris climate accord.  No one could ever fault Ken for "beating around the bush!"
3 comments
Read more
More posts