(See update in newer post.)
A long-time resident of the Roblin area of western Manitoba, Ray Spencer, has asked the Manitoba Department of Water Stewardship to look into an intensive livestock operation north of the town, near Boggy Creek.

The cattle in question with Langen Lk. in b.g.
He says too many cattle (perhaps hundreds) are being fed in a field which slopes directly into Langen Lake, used for years by anglers in the area.

Many are members of the local San Clara/Boggy Creek Metis community. The Lake itself was named for Pat Langen, who used to live nearby. 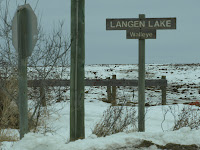 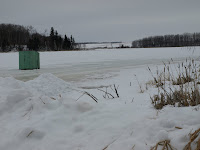 Spencer, an angler, hunting guide, retired farmer and former livestock specialist with Manitoba Agriculture, has talked to some of the people who fish there. And they are worried the waste from the cattle is polluting the lake. (r.) He says some even fear the lake, noted for its walleye, may even die in a few years as a result.

Another Beasley herd in the area, but away from the lake.
Hundreds of Black Angus cattle are wintering on several fields in the immediate area, including the herd near the lake.

Almost every square meter of the frozen fields (l.) is covered with raw, solid cattle waste.

Spencer believes there are about 12 hundred cattle there, altogether.

In his words, "What concerns me is the wintering of all these livestock next to a conservation lake. The raw manure could drain right in."

He says overflow from the lake drains into the Shell River, a main waterway in the area.

But the owner of the livestock, John Beasley, does not believe this is happening.

He says he'd like to see test results from the lake water before he will accept it is being polluted.

Beasley claims he's "not exactly sure," even roughly, how many cattle he has.

In any case, he believes it's not the actual numbers, but the way they are managed, that's relevant.

Beasley believes he does what he can to keep pollution to a minimum. 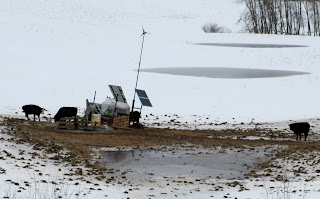 He says he's planted trees, put up a fence which keeps the cattle back from the lake and an "off-site" watering system,(r.) 200 meters back from the water. He says he also grows perennial forage crops to keep nutrient buildup to a minimum.

He wonders whether those who are concerned would rather see cerial crops in the area, where lots of chemicals would be sprayed.
He says he has talked to those who fish in the lake and no one has complained to him, directly.

He says he fishes in the lake himself and "takes the fishery seriously."

Meanwhile, Spencer says he has asked Water Stewardship to investigate and believes an inspector will be out any day now.
====

UPDATE - The Department of Conservation (not Water Stewardship) dispatched a rookie "Environmental Officer," Dave Yunker, to the scene yesterday. (Mar.24th) All he would say is, "It may look bad" with all that manure on the hill, but he'll have to check with his boss to find out if any regulations have been broken.
(He did say that Beasley has registered a manure management plan for his operation.) Stay tuned! l.p.
(Photos by l.p.)
==========
PLEASE ALSO READ; Lake of the Prairies - the New Lake Winnipeg? - by Larry Powell
=======
COMMENT:
This is great reporting, Larry - good photos, too!
Who needs the CBC???? (losing hundreds of jobs! Disgusting!)
Elaine Hughes
at 08:59 2 comments: Links to this post