Showing posts with the label Environmental
Show all

- December 15, 2022
The Earthshot Prize was designed to find and grow the solutions that will repair our planet this decade. We face our greatest challenge; to regenerate the place we all call home in the next ten years. We believe in the power of human ingenuity to prove to us all that the seemingly impossible is possible. Details here.
Post a Comment
Read more

U.N. blueprint on climate emergencies reminds us of man's legacy of deadly pollution and destruction of wildlife. 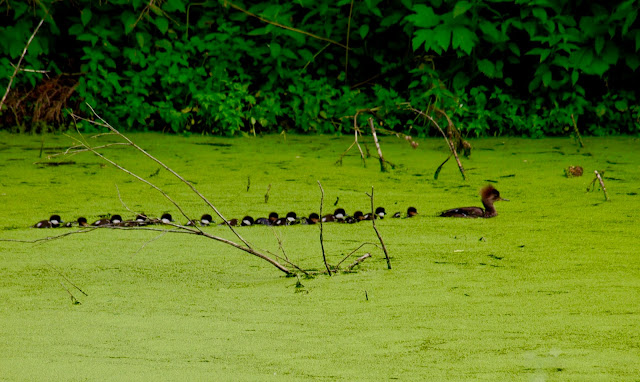 EcoWatch Ducks swim through an "algal soup" - a stream in Manitoba Canada probably  over-fertilized  by livestock and human waste. A PinP photo. The head of the world body sounds the alarm on what he calls humanity's "senseless and suicidal war on nature." Details here.
Post a Comment
Read more 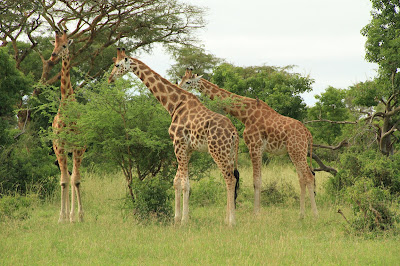 YaleEnvironment360 In the line of fire? Giraffe in a Ugandan National Park destined for major oil development. Photo by  DrexRockman . Despite the global plunge in oil prices, a major pipeline that would carry oil 900 miles across East Africa is moving ahead. International experts warn that the $20 billion project will displace thousands of small farmers and put key wildlife habitat and coastal waters at risk. Story here.
1 comment
Read more 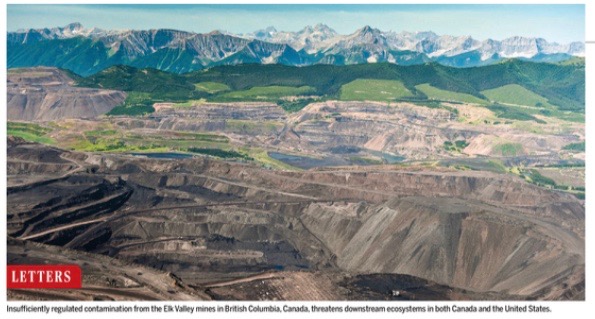 Science Magazine In 2019, Canada approved an extension of the deadline to start one of the world’s largest copper and gold mines in the headwaters of the transboundary Unuk River ( 1 ). The plan for the Kerr-Sulphurets -Mitchell (KSM) mine is to dig one of the largest human-made holes on earth, erect one of the highest dams in North America, and operate water treatment for 200 years after the mine closes ( 2 ). Mines such as KSM pose long-term risks to downstream water quality, fish, and people ( 3 ). Given that mine contamination is not constrained by political boundaries, U.S., Canadian, and Indigenous governments must urgently engage in collaborative evaluation and regulation of mines in internationally shared rivers. Shortfalls in mine assessments and permitting policies should be addressed. Mine assessments underestimate risk at high environmental cost. Contributing factors include the ecological complexity of rivers, policy shortcomings in weighing environmental risk
Post a Comment
Read more 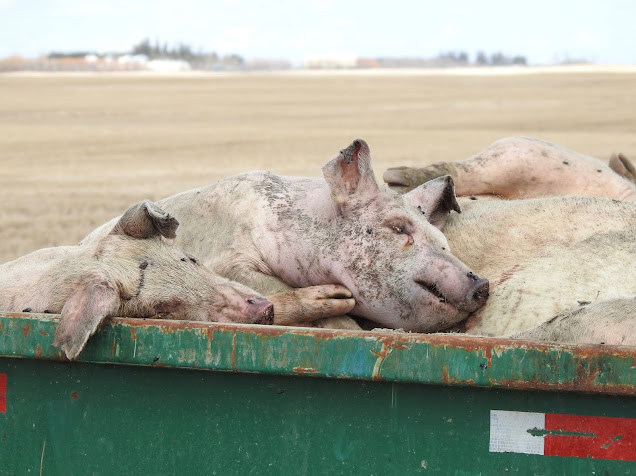 by Larry Powell Hog carcasses in two dumpsters on a side road near the Decker Colony, northwest of Brandon, Apr. 24th. I spotted these carcasses on April 24th. My initial attempts to phone the colony about this (then accessible by appointment only due to Covid-19), failed. Today, the Colony's Barn Manager, David Waldner, called me back (May 6th). He says the hogs died of natural causes, not disease. In his words, "Hogs die." Sometimes one gets a broken leg, for example, and has to be put down. But most of the animals in the dumpsters, were what he calls "standard mortalities," not the result of disease. He says the company which picks up the carcasses, usually comes about once a week. But, due to mechanical issues, it was delayed. As a result, they sat there for longer than normal. Because of that, he explains, the bodies were bloated. And this likely makes it appear as if there are more than the 20 which he estimates were in the dumpsters.
1 comment
Read more

What could our post-pandemic world look like? It depends on you and me!

- May 02, 2020
by Larry Powell Like everyone else, I’m worried.   But not just about the Covid-19 pandemic.  It’s what the future holds once it ends that scares me, too. Man’s assault on our planet s imply cannot pick up where it left off when the virus hit. It’s true that our economy cannot remain at this level of lockdown forever. But, if we just come “roaring back, full tilt” when it’s over, we’ve lea rned nothing. And civilization as we know it will resume its relentless slide, once again.   So what have we learned? Lives can be saved just by slowing the frantic pace of human activity. Pollutants spewing from industrial plants, ground vehicles, jet planes and ocean vessels have dipped dramatically due to the slowdown forced by Covid. And they’re not just greenhouse gases which are dangerously heating up the Earth, spawning violent storms, rising sea levels and devastating floods (think Fort Mac.) that have gone down, significantly. They’re also the kind that get into your lun
Post a Comment
Read more 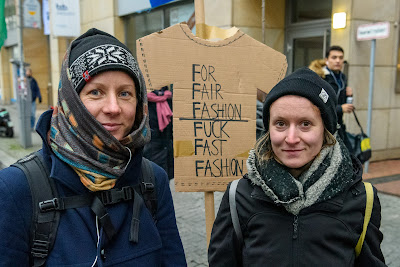 Nature Reviews Earth & Environment . Stefan Müller (climate stuff) from Germany Fundamental changes to the fashion business model, including an urgent transition away from ‘fast fashion’, are needed to improve the long-term sustainability of the fashion supply chain, argue Kirsi Niinimäki and colleagues in a Review published in  Nature Reviews Earth & Environment . The fashion industry is the second largest industrial polluter after aviation, and accounts for up to 10% of global pollution. However, the industry continues to grow, despite rising awareness of the environmental impacts, in part owing to the rise of fast fashion, which relies on cheap manufacturing, frequent consumption, and short-lived garment use. The authors identify the environmental impacts of the fashion supply chain, from production to consumption, focusing on water use, chemical pollution, CO 2  emissions and textile waste. For example, the industry produces over 92 million tonnes
Post a Comment
Read more 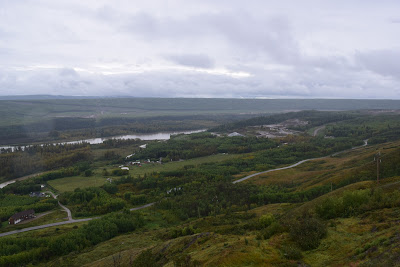 PolicyNote (CCPA - the Canadian Centre for Policy Alternatives) Part 1 of a report on how fracking poses risks to BC Hydro’s Peace River dams, British Columbia, Canada. Story here. The site c dam, BC in an early stage of construction - 2016. Photo by Jeffrey Wynne
Post a Comment
Read more

Grassland biodiversity is blowing in the wind

Science Daily Temperate grasslands are the most endangered but least protected ecosystems on Earth. A new study found that milkweeds and other plants that have seeds carried by the wind are an important source for enriching the diversity of plants in these valuable ecosystems. Story here. Grasslands Nat'l. Park, Canada. Milkweed in a roadside ditch in Manitoba. Photos by PinP.
Post a Comment
Read more

The day of the salamander. How a big highway project in southwestern Manitoba is having to "make way" for a little amphibian, or face legal consequences. Larry Powell prepared this video report.

by Larry Powell TEXT VERSION - "The day of the salamander." The summer of the salamander. How the little amphibian forced a big highway project in southwestern Manitoba to work around it, or face legal consequences.   by Larry Powell. Just as a multi-million dollar road improvement project was about to begin - between Shoal Lake and Hamiota in July - salamanders were found in the wetlands along the right-of-way.  Tiger salamanders in captivity. A Wikipedia photo. And not just any salamanders. These were the prairie population of  tiger  salamanders ( Ambystoma tigrinum ), considered a “species of concern” under the Federal Species at Risk Act.   "Turbidity curtains." A  PinP  photo. As a result, so-called “turbidity curtains” (above) were strung along the area affected. They prevent sediment created in this “hot zone” of construction, from spreading throughout the entire slough. That meant, salamanders trapped within the curtains, had to b
Post a Comment
Read more 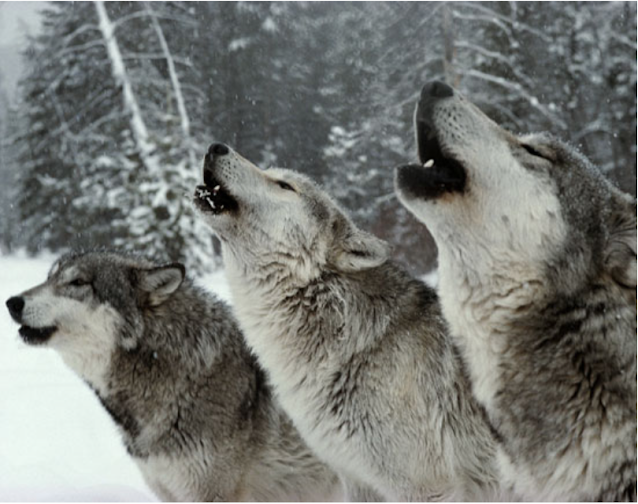 While the consequences of habitat loss have been known for some time, new research just published, underlines just how grave the situation has become.  While this latest research is German, animals like the grey wolf faces similar disruption in North America.  It’s called “habitat fragmentation.” And, it’s been happening on such a large scale, it’s been hard to tell what aspects are the most destructive. That's because ecologists - at least 'til now - haven't been able to properly keep track of all wildlife within an entire eco-system when human developments confine them to smaller and more isolated patches of livable space.  --> -30-
Post a Comment
Read more

"Artifishal." The fight to save wild salmon. (Video)

Deadly gas: Cutting farm emissions in half could save 3,000 lives a year 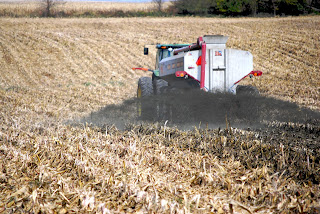 Bureau of Investigative Journalism Spreading manure on a harvested corn field. Photo by Chesapeake Bay Program. Thousands of deaths could be avoided each year if air pollution from UK farms were halved, new analysis has revealed. But the government's failure to act means the most damaging sectors are under no obligation to cut their emissions.  Story here.
Post a Comment
Read more

Plant Species Have Been Disappearing 500 Times Faster Than Normal, Thanks to Humans 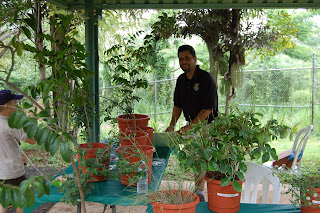 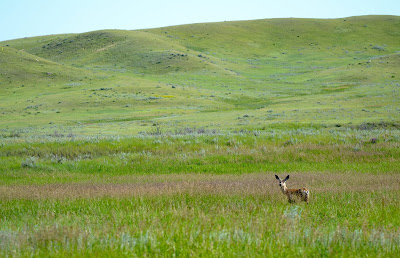 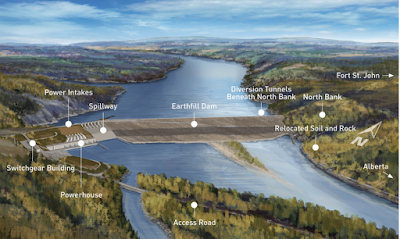 PHYS ORG The design of the "site c" dam in B.C. Almost two in three of Earth's longest rivers have been severed by dams, reservoirs or other manmade constructions, severely damaging some of the most important ecosystems on the planet, researchers said Wednesday.  Story here.
Post a Comment
Read more 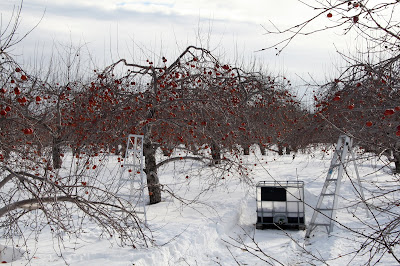 Science Magazine An apple orchard in Quebec, Canada.  Photo by "Daniel Fafard ( Dreamdan )" Young apple trees have been inexplicably dying across the US and Canada.  Story here.
Post a Comment
Read more