Showing posts with the label Greenpeace
Show all

Jane Fonda and Greenpeace. The environment needs you! (Video) 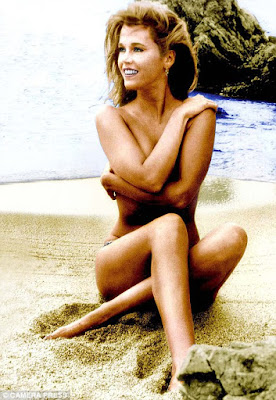 Jane Fonda Speaks Out on Behalf of Greenpeace. "The Environment Needs Our Help!" (Video)

Larry, Never has our blue planet been more under threat.  And never before have we had a better sense of what's at stake. Come watch the latest film that will captivate and motivate you to join a global movement working to save our oceans. Greenpeace Canada is sponsoring a special Winnipeg screening of BLUE  — the critically-acclaimed and award-winning documentary film which takes you deep into our planet’s threatened oceans and seas.  This one-night-only screening is an on-demand event.  It only takes place if 50 tickets are sold. Reserve your spot now  — and portion of ticket sales will go towards supporting Greenpeace's vital work to protect our oceans and the planet.  WHAT: Special screening of BLUE — an award-winning documentary film WHEN: Monday 25th June, 7pm WHERE: Cineplex Odeon McGillivray Cinemas ( 2190 McGillivray Blvd, Winnipeg, MB, R3Y 1S6 ) HOW: Tickets are $14.50 and you can order yours here
Post a Comment
Read more

Stand up for Greenpeace, our great forests and free speech

- May 29, 2017
SumOfUs Greenpeace and Stand.Earth (formerly Forest Ethics) are getting sued for $300 million by Canada’s largest logging company  to make them shut up. Details here.
Post a Comment
Read more

- March 30, 2016
Greenpeace Canada. Remember last year when a global movement of millions kicked Shell out of the Alaskan Arctic? Well, guess which company is back in the spotlight again for its devious deeds: yes, it’s Shell, but this time it’s the Canadian Arctic where the oil giant is up to no good. More here.
Post a Comment
Read more

Greenpeace Canada People in the coastal town of Clyde River, Nunavut — one of the most remote communities in the world — are protesting dangerous oil exploration in their waters. They are taking legal action to protect Canada’s Arctic and the mammals that thrive there from seismic blasting and have just been granted leave to appeal at the Supreme Court of Canada. p style="margin:0px 0px 0px 38px;"> A five-year oil exploration project has been approved without Inuit consent off Clyde River’s coast, which allows seismic blasting — a process of firing loud sonic explosions through the ocean to find oil — as a first step towards dangerous Arctic oil drilling. But it’s not just the oil drilling that’s dangerous — these explosions can disrupt migration paths of marine animals like narwhals, belugas, and bowheads, sometimes causing permanent hearing loss, and in the worst case, even death. Join this brave community in their fight to protect their home and their trad
Post a Comment
Read more

Fukushima Nuclear Disaster: 5 Years On & No End in Sight

- March 11, 2016
Greenpeace Canada Naoto Kan, a supporter of nuclear power when he was  Japan's Prime Minister  , now opposes it in light of the terrible Fukushima disaster. Story here.
Post a Comment
Read more

- March 10, 2016
Greenpeace Canada How 'clean' is the palm oil used by major brands around the world? Today, we're releasing the results of our investigation into which companies are keeping promises to stop deforestation in Indonesia for palm oil.  Take a look now to see who's keeping up - and who's lagging way behind. More here.
Post a Comment
Read more

- December 08, 2015
Hi Larry, As you read this email, vast swathes of the UK are underwater. Buckling from the strain of torrential rains, rivers have overflowed and flood defences have been breached. Hundreds of families have been forced to evacuate their homes [1]. David Cameron has pledged to help people suffering in the wake of the destruction. That’s a start. But in the aftermath of such ferocious storms,  we need to make sure he joins the dots to climate change .
Post a Comment
Read more

Dear Larry, The fires in Indonesia have been called “a crime against humanity” – and our investigators are on the ground now gathering evidence to expose the companies responsible and hold them to account.  Can you take your support to the next step and help us by donating £5 per month?
Post a Comment
Read more
More posts