Some time ago, I sent a a story I had written and researched about the role of Manitoba's livestock sector in the production of greenhouse gases, to the Premier and the Ministers of Agriculture and Conservation (Environment) for their comment.
Please see my original message and story, below, then the government's response after that.
I am presenting them here without comment. WHAT DO YOU THINK?
Why not scroll down and send me feedback via email?
THANKS!
Larry
__________________________________

I would very much appreciate it if you could get back to me with your observations on the article below.
Thanks so much for your attention.

Figures from Environment Canada show that farming is playing an increasing role in Manitoba's levels of greenhouse gases.
In 1990, agriculture produced just under one quarter of this province's emissions. (24.4%) Fifteen years later, by 2004, that share had jumped to almost one third of the total. (32.8%)
Manitoba's growing livestock numbers are believed to be the cause.
This province's beef cattle population has been growing steadily in the past decade, to about 1.3 million today. As well, about five million hogs are slaughtered in the province each year. That number has more than doubled in the past decade.
And therein seems to lie the problem.
In a report submitted to a United Nations meeting on climate change, Environment Canada says a couple of factors contributed significantly to the increase over that period.
Gases produced from manure spread on Manitoba cropland and pastures jumped by more than two-thirds. (68%) But close behind was a source often made fun of, or ignored. That is the flatulence produced mostly by beef cattle. It went up 60%.
Cows produce a lot of methane which, as a greenhouse gas, is 21 times stronger than carbon dioxide, the most common one.
The increasing use of synthetic nitrogen fertilizer is also a significant source because such fertilizer produces nitrous oxide; 310 times more powerful than carbon dioxide.
The figures on agriculture do not include the emissions produced by farm machinery or the energy used to heat farm buildings.
The one-third share of emissions contributed by Manitoba farms in 2004 compares to just 7 percent which agriculture contributed, overall in Canada that year.
The percentage which Manitoba farms contributed over that ten year period went up by 45%. The corresponding figure for Canada as a whole was 23%.

OBSERVATION: Manitoba's factory-farming model does not exactly cover itself in glory with its above-the-national-average performance in the creation of climate-changing greenhouse gases.
Nor does lavish praise from our Agriculture Minister, Rosann Wowchuk, change that fact.
The Minister recently referred to Manitoba's livestock sector as "an industry that is providing leadership to the rest of the country in environmental sustainability!"
Is it any wonder, then that this same government recently told a rural municipality in the province it wouldn't approve the RM's development plan if it did not remove a provision that called for a cap on the size of animal operations? L.P.
January 23, 2008 I am writing in response to your letter regarding greenhouse gas levels in Manitoba.

Agricultural emissions appear out of proportion with overall greenhouse gas emissions in Manitoba because other sources are comparatively small, due primarily to the environmentally sustainable hydro-electricity we use as our main power source. In fact, agricultural activities in our province represent just 0.8 per cent of total Canadian greenhouse gas emissions, and are among the lowest in Canada. They are also the lowest of all three prairie provinces.

Manitoba is a leader in environmental sustainability strategies, and the fact that we are updating our climate change action plan, which is among the most progressive in North America, is a clear indication of this leadership. We have been recognized nationally and internationally for our efforts and remain committed to meeting the greenhouse gas reduction targets of the Kyoto Accord.

In my department, we have undertaken numerous initiatives to sustain and enhance our environment, including:

the Covering New Ground Program which has provided over $10 million to fund sustainability projects;
a soil testing program which is helping farmers determine the amount of fertilizer and other management practices that are best for their soil types;
support for the Alternative Land Use Services project, which provides incentives to farmers to implement management practices that contribute to sustainability;
delivery of the national Environmental Farm Plan program to over 6,000 producers, which has influenced sustainable farming practices on over 8.1 million acres of agricultural land.
I note that because of the efforts of my department and the commitment of Manitoba farmers, we have had the greatest participation in environmental farm planning of all three prairie provinces. Through these and other initiatives, Manitoba farmers are contributing to reducing greenhouse gas emissions for the benefit of future generations.

Thank you for your thoughts on this important topic of environmental sustainability in agriculture.

A Testament to Failure (Letter) A tiny fraction of the massive straw piles at the plant.
now rotting and surely rat-infested. PinP photos.

Regarding your recent story about the demise of the strawboard plant at Elie; my heart sinks every time I drive by that site.

It is a testament to the failure of so many things that society ought to be supporting; not relegating to the garbage dump.

Instead of being dismantled and sold to the highest bidder, the plant could still be up and running, diverting waste straw into a valuable building product.

Rather than being gutted, it could still be providing a market for farmers to sell what is an otherwise useless, not to mention dangerous product.

Instead, we can look forward to a future where irresponsible farmers continue to burn their stubble with impunity.

In the process, people unfortunate enough to be in the wrong place, including kids with asthma, will be left to their own devices to cope with the choking smoke.

Motorists will continue to run into each other due to reduced visibility caused by stubble-burning.

Last fall, I was treated to quite a spectacle as I was driving into the outskirts of Winnipeg from the west. 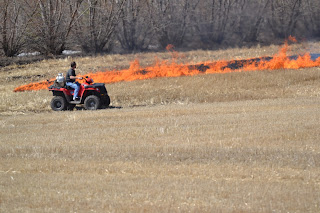 PinP photo.
Racing along the edge of a huge stubble field near the highway, was a farmer on an ATV (similar to the one above), burning his excess straw.

He had ingeniously rigged his vehicle with a propane tank and a boom. It was creating a long trail of fire behind him, ensuring the entire field would be ignited. On the far side of the same field, smoke billowed hundreds of feet into the air.

That night, the street outside the home where we stayed in the city, was enveloped in smoke.

The next morning, newscasts were filled with reports of traffic snarls and a major accident in the city which critically injured a truck driver; all thanks to stubble smoke!

There was a day when governments who claim to be "social democrats" (like our present one), would have nationalized the plant and operated it as a crown corporation, like Manitoba Hydro.

Instead of requiring that our gasoline contain the questionable fuel additive, ethanol, for example, why not mandate the use of environmentally-friendly strawboard in new construction?

But I guess solutions like that are beyond the reach of our collective political intellect.

Instead, we can look forward to the continued rape of our forests, not to mention untold millions of additional taxpayer dollars being squandered on things like gambling casinos and sports bubbles in Winnipeg!