Lake of the Prairies – The New Lake Winnipeg?

A study of western Manitoba’s Shell River watershed points to the buildup of nutrients as the most serious water quality problem in the region.
The 2008 "State of the Watershed" report by the Lake of the Prairies Conservation District is a report card on the health of our surface and ground water.
Its verdict? It could be better! 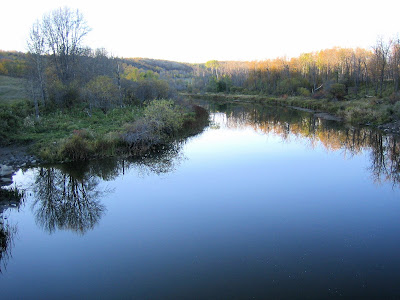 Autumn in the Shell Valley - photos by L.P.
The Shell River rises in the Duck Mountains and meanders southward for almost 80 kilometers before emptying into the Lake of the Prairies at Asessippi Park.
The watershed stretches well into Saskatchewan. In Manitoba, it covers almost 3,000 km2, and includes parts of the Duck and Riding Mountain Parks, and the communities of Roblin, Inglis and San Clara.
The study by technical experts, says farming and other activities are adding excess sediments and nutrients to waterways in the region.
These nutrients cause harmful, sometimes toxic algae to grow, robbing those waterways of oxygen and killing fish in both summer and winter.
Mucky green messes caused by algal blooms are often seen in the Shellmouth Reservoir in late summer and early fall.
The report calls the buildup of these nutrients, especially phosphorous, the most critical water quality issue in the region.
But there are others.
People are channeling or trenching waterways to improve drainage.
This increases both the speed and volume of water in them.
Erosion of the banks and even more rapid movement of nutrients and sediment are the result.
The report’s authors express concern that human activity is damaging or destroying “riparian areas.” These are natural buffers like trees along the shorelines that protect waterways and provide wildlife habitat.
Governments have long encouraged farmers to preserve such riparian cover and keep livestock back from the edges. (Manitoba even offers tax breaks to farmers who do this.) 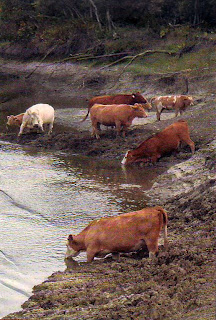 A common sight. (r. & below) Trees bulldozed around waterways - Livestock with easy access. Banks slumping. Cattle manure washing in, reducing water quality, not only for humans, but for the cattle themselves. 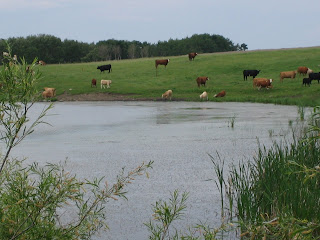 
Photo by l.p.
Despite programs such as the Riparian Tax Credit, the report estimates that at least 30 kilometers of riparian areas in the watershed are at risk of erosion. Streams flowing through cropland are of special concern.

Tests for pesticides and bacteria show these to be mostly within provincial drinking water quality guidelines.
Silt and suspended solids were occasionally higher than the guidelines.
Levels of dissolved salts and minerals, like calcium and sodium, often exceeded objectives for irrigation. The report suggests both industrial and municipal discharges can adversely affect such levels.
Iron and manganese, which can give water an unpleasant taste and colour, were found to be consistently above recommended levels in both the Shell and Assiniboine Rivers.
But the most troublesome finding has to do with nitrogen and phosphorous, mostly the latter.
Phosphorous is a common nutrient in sewage and livestock waste. Once it gets into waterways, it promotes the growth of algae.
Tests show phosphorous levels in the Shell River watershed consistently violate Manitoba’s guidelines for drinking water quality.
Ironically, people are destroying natural features of the landscape that could improve the nutrient problem. The report finds that people are draining wetlands “without regard to negative ecological consequences.”
A study by Ducks Unlimited, quoted in the report, suggests up to 70% of wetlands in the watershed have been either lost or degraded since 1968.
Wetlands act as nutrient “sinks.” They filter out up to 90% of sediment, nutrients and bacteria from receiving waters.
They also allow water to percolate through soils, recharge groundwater supplies and buffer the impact of both floods and droughts, by capturing water and releasing it slowly.
Yet drainage and infilling continue to damage these wetlands.

But surface waters aren’t the only concern in the report.
Bacteria that indicate the possibility of contamination from the surface are commonly found in private water wells.
The serious kind, E.coli, was found in 6% of water samples taken. E.coli can be found in human and animal feces.
The study warns that water from almost all of the public drinking water sources within the watershed, while safe to drink, are at “high or moderate” risk of pollution.
Places falling into this category include Inglis, Asessippi Park and East Blue Lake in Duck Mountain Park.
The appearance of some public groundwater sources is also being affected.
For example, the public water supplies of Ricker's Campground on Lake of the Prairies, as well as the Towns of Roblin and Inglis, exceed the Guidelines for Canadian Drinking Water Aesthetics for factors such as manganese, hardness, and Total Dissolved Solids (TDS).

The report goes on to say, several species of birds, fish and plants face an uncertain future in this area. That’s because their habitat is being lost more quickly than it is being restored. 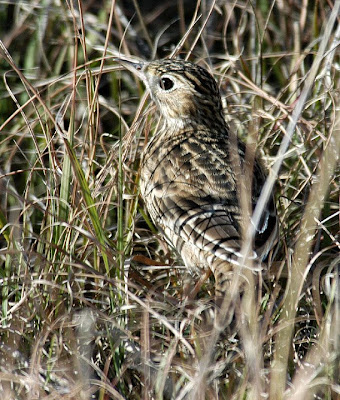 Spragues’ Pipit (l.)is one of the species in the Shell River Watershed at risk. (Photo courtesy GoogleImages.)

The report calls for several steps to be taken to improve the situation. Among them;

• No more net loss of sloughs, wetlands or potholes.
• Neglected, abandoned or unused wells should be sealed because they can act as a direct pathway for contaminants from the surface.
• New drainage projects should be done using Best Management Practices, with careful regard for the environment,.
• Solve the lack of long-term planning by creating a watershed-wide Surface Water Management Plan.
The Conservation District will hold public meetings on the report in Roblin and Inglis next week.
- October 28, 2008 No comments:

Manitoba's Conservation Minister, Stan Struthers, promises that past mistakes in the way factory hog barns have grown up in parts of the province, will not be repeated elsewhere.
Struthers makes the remarks in an interview with "Paths Less Travelled" today.
(Struthers Photo Courtesy Gov of MB)
In the face of sustained and sometimes vicious opposition from the hog lobby,
Struthers (also the Minister responsible for the environment) recently piloted a law through the provincial legislature, freezing the development of new factory hog barns in three areas of the province; the Interlake, the Red River Valley and the southeast.
But new ones will still be allowed in the rest of the province!
In that regard, Struthers has reassuring words for people in these areas (like myself) who might fear they will be adversely affected by new barns.
He says a working group will bring recommendations back to him that will address such things as spread fields, nutrient levels and the ability of crops to take up those nutrients from the soil.
Environmentalists and others have complained in the past that too much slurry (the waste from millions of hogs in these barns), has been applied too heavily as fertilizer on "spread fields," where crops like corn or forage are typically grown.
This practice creates as excess of nutrients such as nitrogen and phosphorous. These then build up in the soil and wash off into rivers, streams and lakes, notably Lake Winnipeg.
There, they promote the growth of algae which deprives waterways of oxygen. (Lake Winnipeg is one of the world's largest fresh-water lakes with one of the biggest drainage areas.)
At least one scientist said recently, Lake Winnipeg is in danger of becoming a "dead zone,"in which waterways become so polluted they choke out all important aquatic life, including fish.
Several huge dead zones already exist in many parts of the world. And, they're growing. Fed by things like synthetic farm fertilizers, livestock, industrial and human waste, they wipe out commercial fisheries and often provide homes for nothing more than jellyfish!
Struthers referred to the many pig factories that have sprung up around La Broquerie and Hanover in the southeast over the past several years, for example, as "extreme."
But he believes many existing big barns in such locations will now start installing state-of-the art sewage treatment plans, even better than some already in use in urban centres. He says they will have to make such improvements, if they want to expand those facilities.
He also thinks more and more companies will harness the methane from their own operations to generate power and thus keep their costs down.
And he hints that improvements proposed in a report of the Clean Environment Commission, (into hog industry "sustainability") will be incorporated into the report from his working group. That, he says, will mean that the mistakes of the past, will not be repeated.
Big changes could also be on the way in the process surrounding future project approvals, the Minister hints.
Technical Review Committees have gained the reputation of being rubber stamps for barn applications in the past.
Struthers says those committees have been "worse than rubber stamps. They have simply rammed projects through!"
The Minister also suggests ways must be found to take the pressure off smaller farmers, the kind exerted by the big industrial-style barns, so they can continue to survive. He suggests organic farming could be a solution.
Struthers believes the trend toward the large factory-style hog barns began several years ago, when the previous Tory government did away with the Hog Marketing Board.
He confesses he would have liked the subsequent NDP government to have held a vote, to decide whether farmers wanted it back. No vote was ever held.
Struthers did not say when the working group will get back to him with recommendations on the future course of hog industry development. But, as he puts it, "The sooner, the better."
====================
Footnote: I believe Stan Struthers and his government ought to be congratulated. He navigated the "moratorium bill" (the one which put a hold on hog barn construction in 3 areas of the province already saturated by them) through the Legislature under tremendous, often frenetic pressure from the hog lobby, represented by the Manitoba Pork Council. The Council, already the recipient of mounds of "corporate welfare" from all levels of government, continues to howl that it has been "picked on" & that it is not really to blame for pollution problems associated with its industry.
Manitoba's hog population has ballooned from about 2 million in 1990 to more than 9 million today!
As the Minister himself puts it, "How much is enough?"
Having said all that, I believe the real test of government sincerity will unfold down the road. If the hog industry is allowed to "saturate" the rest of the province, as it has already done in the 3 areas mentioned, (also under the watch of Struther's government) before being reigned in again, good will for this government, at least in my circle of friends, acquaintances and others who actually value the quality of our land, air and water, will quickly evaporate. L.P.
- October 21, 2008 No comments:

Email ThisBlogThis!Share to TwitterShare to FacebookShare to Pinterest
Labels: Livestock

A SPIKE IN ETHANOL'S COFFIN? 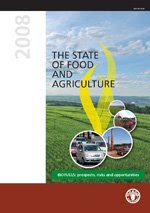 7 October 2008, Rome - Biofuel policies and subsidies should be urgently reviewed in order to preserve the goal of world food
security, protect poor farmers, promote broad-based rural development and ensure environmental sustainability, FAO said today in a new edition of its annual flagship publication The State of Food and Agriculture (SOFA) 2008.

(also see post directly below and my article "Bursting the Ethanol Bubble" in older posts.) L.P.
- October 08, 2008 No comments: