Showing posts with the label Factory Farms
Show all

- July 14, 2022
Big Industry Hiding the Truth   Let the Public See How Pigs Are Housed   (Winnipeg July 14,2022) – Hog Watch Manitoba supports the goals of Amy Sorrano and Nick Schafer, convicted animal rights activists. They have asked that cameras be installed in intensive confinement hog barns in order to monitor how pigs are being treated in these huge facilities.   Currently, there is no way for the public or concerned citizens to ensure that pigs are being treated humanely or to even understand how the pigs are being raised.   Entry into the barns is tightly controlled for biosecurity and public relation reasons.   “The hog industry has good reason to keep their barn doors tightly closed” says Vicki Burns, Hog Watch Manitoba Steering committee member, “They know that many of the public would be disgusted by how these animals are forced to live, crammed in with hundreds of animals, above pits of their urine and feces, breathing in toxic gases rising from the manure pits.”   Hog Watch Manitoba adv
Post a Comment
Read more

- June 14, 2022
National Observer In the early hours of Dec. 7, 2019, members of the social justice group  Rose’s Law  entered a barn through an unlocked door at the  Porgreg pig breeding facility  in Saint-Hyacinthe, Que. Inside, they  videotaped  vile conditions. Seven hours later, they were arrested. Story here.
Post a Comment
Read more Hogs at the tail end of misguided provincial planning allowing intensive hog operations on flood plains.   “Where is the wisdom allowing these type of operations to be built on flood plains” says Janine Gibson long time member of HOG WATCH who resides among the heaviest concentration of these operations in Southeastern Manitoba.  As a known flood plain, the Red River Valley experienced severe floods in 1997, 2009, 2011 and now again, this year. “What on earth was the province thinking when the moratorium was lifted to allow these massive hog operations to further expand. Now we face increasing amounts of phosphorus and nitrogen into the watershed,” she adds. In 2017 the provincial Conservative government removed key sections in the Environment Act that restricted new hog barn development on known floodplains. Recent aerial photos from HOG WATCH  clearly show hog operations and fields within a vast sea of water covering thousands of acres routinely used for hog manure spread fields. HO
Post a Comment
Read more

- May 06, 2022
(Winnipeg April 27, 2022) – Hog Watch Manitoba is asking for help for rural residents whose lives are negatively impacted by noxious odours from neighbouring hog barns. Those bad smells are not just a nuisance but can contain toxic gases that have human health impacts. “Hog Watch Manitoba recently purchased a hydrogen sulfide gas monitoring device ACRULOG H2S to measure gases causing foul smells for rural residents” says Vicki Burns, Hog Watch Manitoba spokesperson. “We don’t have any government support like the inspectors who take measurements in the city. The Manitoba government seems to expect rural residents to put up with it as a routine cost of living in the country”. Recent readings from one location near a hog barn have documented high levels of hydrogen sulfide. According to the Center for Disease Control (CDC) exposure to hydrogen sulfide may cause irritation to the eyes and respiratory system. It can also cause apnea, coma, convulsions; dizziness, headache, weakness, irritab
Post a Comment
Read more

"AT THE TROUGH." A VIDEO THAT NEEDS TO BE SEEN AGAIN.

Many well-informed, dedicated and concerned individuals produced this video in 2008. Sadly, their warnings about the dirty and dangerous consequences of unregulated factory "farming" in Manitoba have not been heeded. The industry has been given free-rein and continues to expand with few, if any checks and balances. The video is less than an hour long. I implore you to take the time to watch! If you did see it before, perhaps it will remind you again of just how grave these issues really are. If you have not, I know it will concern you, too - perhaps even inspire you to take action of your own. Thank you!  PinP
2 comments
Read more

W5: Fears growing that another global pandemic is on the horizon (video)

Please also read: BEYOND COVID 19. ARE WE RISKING YET ANOTHER PANDEMIC IF WE CONTINUE TO EMBRACE "ASSEMBLY-LINE" LIVESTOCK PRODUCTION INTO THE FUTURE?
1 comment
Read more

Below is a financial statement posted on the company website. ============== It was recently announced that the governments of Canada and Manitoba were "investing" $2.2 million in three agricultural research projects, to be conducted by the Dutch-based conglomerate, Topigs Norsvin Canada (TN), that will "enhance the competitiveness of Manitoba pork producers." (And TN, too, no doubt!) The announcement came despite opposition to a recently approved TN project to build major pig barns near the southern Manitoba community of Plumas. It drew the outrage of many of those residents, along with the citizen group, Hogwatch Manitoba.
Post a Comment
Read more 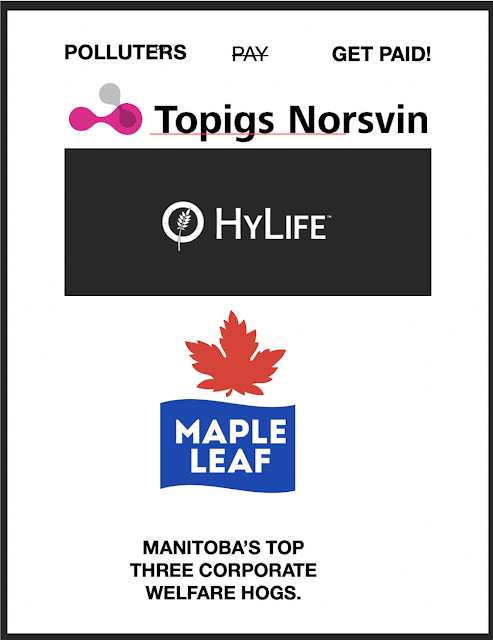 Winnipeg (December 2, 2021) – Hog Watch Manitoba shares the anger and frustration felt by many Plumas area residents who fought the approval of two large hog facilities in their municipality this past summer. Not only are they angered by the decision to go ahead with these two huge barns in the face of so much local opposition but now to find that their tax dollars are going to pay for it, is outrageous.   They dispute the company’s claim this is being built in an isolated area as there are 8 homes in less than a 3 km circumference of one barn and the other is in close range to the Big Grass River and marshland, environmentally sensitive areas.  There were 52 letters of opposition to the proposal and numerous presentations made expressing legitimate concerns about health impacts from toxic emissions from barns and open manure lagoons, and water consumption of 44,000 gallons a day depleting local water resources. Hog Watch Manitoba is calling on both the provincial and federal governmen
1 comment
Read more

THE HIGH-MAINTENANCE POLLUTING PORK INDUSTRY BELLIES UP to THE TAXPAYER TROUGH ONCE AGAIN.

- November 22, 2021
Manitoba/Canada News Release GOVERNMENTS INVEST IN "INNOVATION" TO "HELP INCREASE  COMPETITIVENESS AND SUSTAINABILITY OF PORK PRODUCERS" The governments of Canada and Manitoba are investing $2.2 million in three agricultural research projects, to be conducted by Topigs Norsvin Canada (TN), that will enhance the competitiveness of Manitoba pork producers by improving the precision feeding of sows and promoting higher animal welfare standards, Federal Agriculture and Agri-Food Minister Marie-Claude Bibeau and Manitoba Agriculture and Resource Development Minister Ralph Eichler announced today. "These innovative projects will give the pork industry more tools in their sustainability toolbox," said Bibeau. "They will help to improve feeding and housing for the pigs, which leads to better resource efficiency and a reduced environmental footprint for producers. Topigs Norsvin plays a big role in making Canada a global leader in swine genetics, and we are p
1 comment
Read more 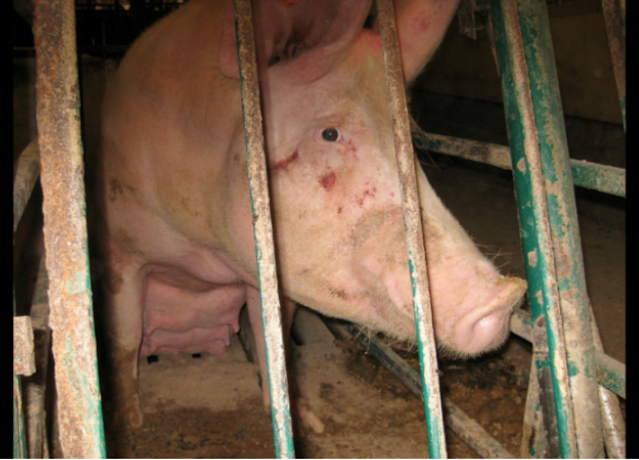 PRESS RELEASE PR Newswire TORONTO - The global charity World Animal Protection commissioned a public opinion poll to find out where Canadians stand on issues related to our food system, including animal welfare, the environmental impacts of industrial animal agriculture and the overuse of antibiotics. An EKOS research online survey of 2,143 Canadians conducted last month shows that Canadians have many concerns about the harmful effects of industrial animal agriculture. And with a potential election looming, the charity hopes all political party leaders will address such issues on the campaign trail. When it comes to safeguarding human health, 60 per cent of Canadians agreed with many experts who have identified antibiotic overuse on farm animals as contributing to a rise in antibiotic resistant bacteria (aka "superbugs"). Superbugs make it harder for humans to respond to treatment from antibiotics. A recent report from the charity even found antibiotic resistance genes (whic
Post a Comment
Read more 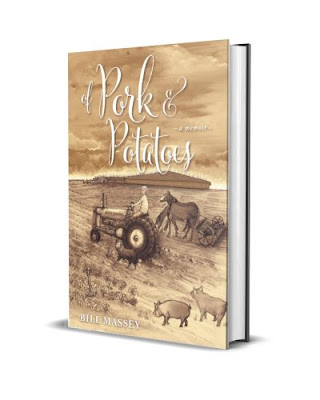 By Larry Powell This book should be required reading for anyone who is concerned about the way hogs are raised in Manitoba. And that goes double for those who may still actually believe there's nothing to be concerned about.  Manitoba author Bill Massey (above) grew up in a troubled family with an abusive father. Despite all this, or perhaps because of it, he emerged with a heightened sense of what was fair and what was not. His toughness and perseverance would serve him well in the face of the challenges which lay ahead - ones he could not have possibly imagined.  Bill and his wife Dorothy have, for years, raised chickens and a few hogs on their little farm near Grosse Isle, northwest of Winnipeg. Both have also been teachers, he, a principal and an advocate for abused children.  In 2004, their lives would change, and not for the better. A nearby hog barn, operated by a Hutterite colony, announced it planned to expand. Right away, Bill smelled trouble ahead. And he was right. In
1 comment
Read more

A VOICE OF EXPERIENCE CAUTIONS AGAINST ANOTHER HOG BARN IN MANITOBA 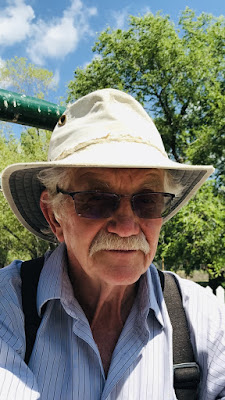 Bill Massey - author of, "Of Pork & Potatoes - a memoir" Massey made the presentation, below, to a Conditional Use Hearing at the RM of  Westlake-Gladstone Municipality on  July 8th 2021.     Thank you for the opportunity to speak at this hearing.  My name is Bill Massey and I have led a group called the Concerned Citizens of Grosse Isle in our struggle with a hog barn in our community.  I have written a book called Of Pork & Potatoes that chronicles the events of the past 15 years in our community.  I’ve been asked to speak by members of your municipality and I’m hoping my remarks will be helpful. I want to begin by describing the issue of odour that our community experienced.  People have been unable to enjoy their properties or care for their yards because of the smell.  Some of them had even confined themselves to their homes.  Others had disconnected fresh air intakes on air conditioning units to attempt to minimize the odor.  People without air conditioning and
1 comment
Read more 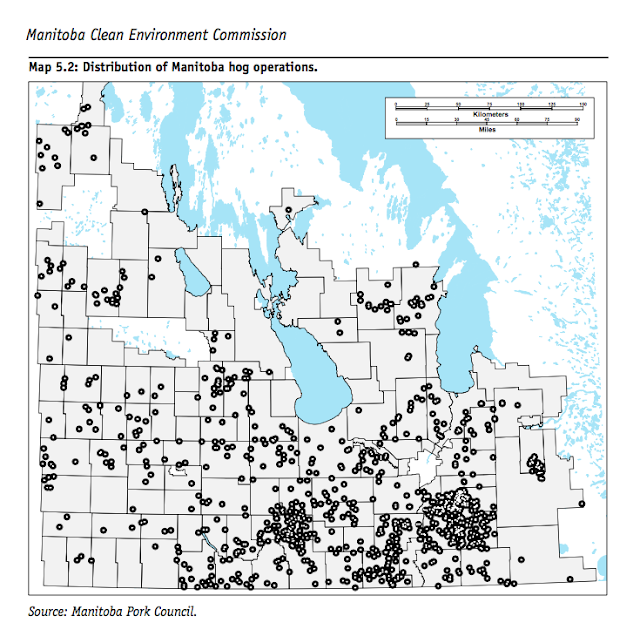 The following letter by Jon Crowson appeared recently in the Empire Advance, a weekly newspaper in Virden, Manitoba.  It's his response to an article which appeared earlier in the same paper (see bottom). Hog Barn Saturation. Thanks for the primer on the provinces hog industry (Empire Advance, June 4, 2021). Frankly I’m not sure I really needed one. This map, from the industry itself, shows hog barn locations as they were n 2007. How many are enough? When the big guns from Manitoba Pork seek a meeting with council (even if they don’t have to leave their own boardroom to do it), one can’t help but be suspicious about their motives. Could it be that recent decisions, such as Cartwright-Roblin council to reject a new barn proposal, has got them worried? Worried that the tide is turning against the takeover of our rural areas by “Big Pork”. When it comes to new factory hog barn proposals the concerns of nearby residents cover the gamut from the stink (sufficient to breech the Internati
1 comment
Read more 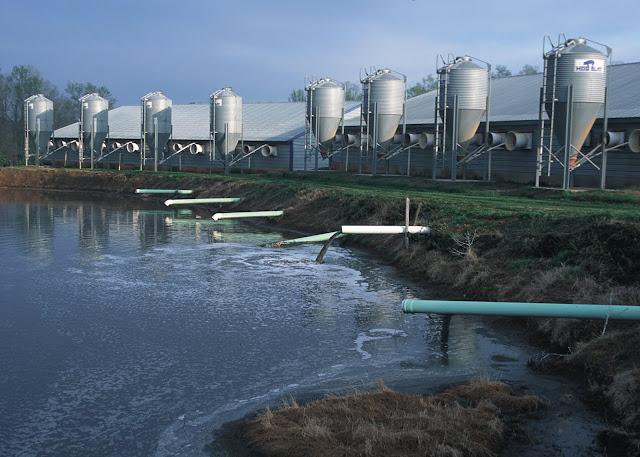 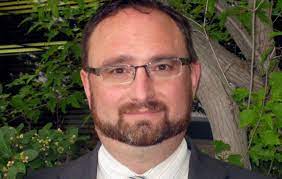 by Larry Powell I feel I must respond to a column now appearing in some weeklies in Manitoba, (See bottom)  “Agriculture, environment and animal care.” Cam Dahl, Apologist-in-Chief for Manitoba Pork. What a masterful piece of propaganda from Cam Dahl, GM of Manitoba Pork, the official mouthpiece of an industry that’s become a runaway train in this province!  He commits so many sins of omission, trying to convince us of the industry's environmental virtues, Lucifer himself must be blushing! For example; Recent tests done for the global c harity, World Animal Protection, have found “superbug” genes developing in waterways around large pig barns in this province.  This is huge. Why?  Because, while we already know people can ingest superbugs either by coming in close contact with infected animals or eating the meat, this surely reveals a previously unknown pathway these harmful organisms can follow to invade our lives.  It surely makes those who eat fish from the contaminated water
1 comment
Read more
More posts