Showing posts with the label colony collapse
Show all

Honeybee Health and Colony Collapse Disorder. A Manitoba Beekeeper Tells it Like it Is. 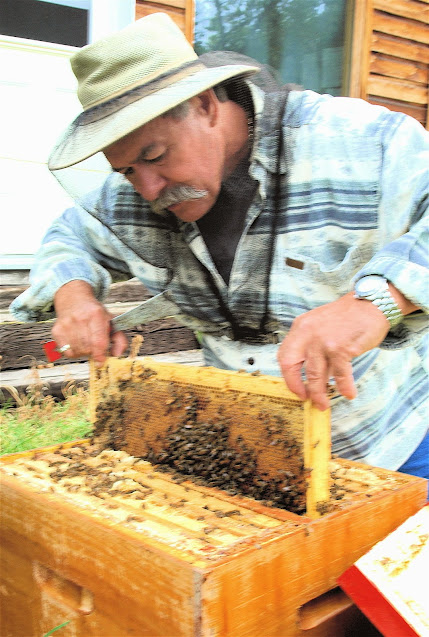 by Larry Powell Tim Wendell, above, his wife Isabel and a seasonal staff of about 30 tend to over 3,000 hives in Manitoba and Saskatchewan, south of the Town of Roblin. A PinP photo. A veteran Canadian beekeeper whose operations produce almost half-a-million kilograms of honey per year, Tim Wendell, has learned the hard way, just how big a threat "neonicotinoids" pose to operations like his. "Neonics" are now the most widely used group of insecticides in the world. They are either sprayed on crops such as corn, soybeans and canola, or used to treat their seeds.  On a recent speaking engagement, he told audiences in Neepawa, MB, he lost one "bee yard" himself in 2012. It was next to a field which had been planted 4 or 5 years straight to corn treated with "neonics."  He estimates, of the 40 thousand bees in that colony, perhaps only 5 thousand were left. And they were "very disorganized - no longer a community."  He says governm
Post a Comment
Read more
More posts