Canada Approves (another) Pesticide Against Wireworms in Crops

You Made It Happen (Video) 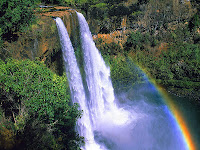 Maui Tomorrow
The food and grain giant has been denied the right to massive water resources to irrigate GM crops in Hawaii. Details here.

The Tyee - By Raffi Cavoukian

Raffi, troubadour to the young, on how to stop the theft of our kids' futures. Details here.
- December 26, 2012 No comments:

Is It Time to Put the Brakes on Runaway Coal Development?

The Globe and Mail
The coal industry is booming in British Columbia, with a dozen new mines proposed around the province and the port of Metro Vancouver making expansive plans to become the biggest coal-exporting facility in North America.
But the flurry of activity is raising environmental concerns at both ends of the supply chain, and British Columbians may soon want to put the brakes on what is starting to look like a runaway coal train. Details here.

PLT: "Runaway coal development" is exactly the effect desired by our Harperite government after it passed on a golden opportunity to tighten restrictions, choosing to actually loosen ones it had earlier promised. In so doing, it has shown itself to be the most blatant and shameless anti-science nation on the planet, caring not a whit for the future of our children. In the full knowledge that coal offers the worst of the worst in terms of energy alternatives and the fight against catastrophic climate change, they govern for business interests only. Period, end of story.
- December 26, 2012 No comments:

Environment Canada - A Year in Review

From super storms to super heat, and from immense flooding to immense fires; "go big" seemed to be the theme for Mother Nature in 2012. Details here.

Beautiful though it may be, heavy hoarfrost has coated power lines throughout Manitoba, causing them to sag and break. Hydro crews have been sent scrambling to fix hundreds of outages. In some cases, power has been out for several hours in freezing temperatures. While cold snaps still occur, the warming atmosphere is capable of holding more moisture - much more than it used to. This triggers more frequent and severe events such as this. (PLT photo.)

PLT: To his credit, Dave Phillips, Ottawa's "go-to" guy for media questions about weather and climate, won't flatly deny that climate change is playing a role here. But neither is he helpful when he muddies the water about not being able to attribute a single year's worth of weather to that factor. (Don't foget Dave, 2012 isn't the only record-setting year we have had of late.) Perhaps media would be well-advised to sound out other scientists, whose jobs do not face Harper's axe if they say things he disagrees with. How about Andrew Weaver of the University of Victoria? He is outspoken, credible and qualified, having been a lead author with the Intergovernmental Panel on Climate Change.
- December 22, 2012 No comments:

In Canada, large industrial operations designed to raise hundreds to thousands of pigs in confinement have largely replaced the small, mixed farms that dominated the landscape before the Second World War. These pig factories typically rely on liquid manure systems and have been widely criticized for their negative impact on the environment, and worker health. Details here.
- December 18, 2012 No comments:

Fracking to be Banned Near Sacred Headwaters in British Columbia

The Globe and Mail reports, “Oil and gas development is to be banned from a 400,000-hectare area in northwestern British Columbia known as the Sacred Headwaters…Details here.

PLT: While I've labelled this post "Victory," a reading of the small print will reveal that it is still the corporations who really call the shots in our world.
- December 18, 2012 No comments:

I'm again involved in researching an in-depth magazine article which will be appearing in the new year. Will tell you more as the time approaches.

And, of course, there's Christmas and all that that involves!

So I won't be posting as often as I normally do. Anyway, things should get back to normal in the next few weeks. Meanwhile, have a great holiday season and the very best in 2013!

Email ThisBlogThis!Share to TwitterShare to FacebookShare to Pinterest
Labels: Christmas

Sharing, Not Buying at Chrtistmas (Podcast)

Over the past century, Christmas has become an annual excuse for frenzied, even pathological consumerism. Sure, it helps businesses big and small, but do we really need all that stuff?  Listen here.
- December 16, 2012 No comments:

The Gift of Death 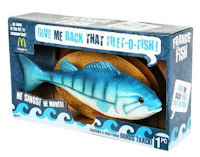 Pathological consumption has become so normalised that we scarcely notice it. Full story here.

PLT: Get a talking fish toy for your loved one this Christmas! What a catch!
- December 14, 2012 No comments:

Email ThisBlogThis!Share to TwitterShare to FacebookShare to Pinterest
Labels: Consumerism

PLT:  Luckily, there's growing opposition to this slimy deal which our very own King Stephen is in the middle of. What's that green stuff on your hands, Prime Minister?
- December 09, 2012 No comments:

Cdn. Youth Delegation - Climate Conference, Qatar
An hour ago, two members of the Arab Youth Climate Movement were  arrested. They held up a banner in the COP18 conference centre that read, “Qatar, why host, not lead?”. Onlookers erupted in cheers as...Details here.
- December 06, 2012 No comments:


Canadians are apologetic people. Yet, navigating the halls of the COP18 climate negotiations as a member of the Canadian Youth Delegation (CYD), the “sorry”s I gave weren’t stereotypical Canuck politeness. Instead, they were apologies of shame for... Details here.

The CYD-DJC is releasing the report Commitment Issues: Tar sands extraction invalidates Canada’s obligations to the UNFCCC and undermines global climate change negotiations. This  technical report details the role of Canada’s tar sands in ensuring the nation’s failure to meet international climate commitments. It calls for a moratorium on new tar sands to developments, as this is the most effective way for Canada to have any hope of adhering to the commitments it has made to the UNFCCC.
The full report is available here, and the executive summary is available here.
Le resumé analytique est disponible en françai
- December 03, 2012 No comments:

Email ThisBlogThis!Share to TwitterShare to FacebookShare to Pinterest
Labels: Climate Change, The War on Tar

Is B.C About to Side With "Big Oil" And Against Its Own People? Let's Make Sure it Doesn't Happen! 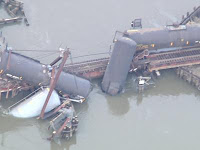 PAULSBORO, N.J. (AP) —A freight train derailed Friday on a railroad bridge that has had problems before, toppling tanker cars partially into a creek and causing a leak of hazardous gas (vinyl chloride) that was blamed for sickening dozens of people, authorities said. Details here. 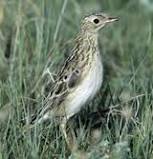 Financial Post.
CALGARY — The Canadian government on Friday blocked a seven-year-old plan to drill more than a thousand natural gas wells in an Alberta wildlife reserve...Details here.
PLT. Please also read our earlier post, "So, What Will it Be, Prairie Grasslands or Pipelines?" And thanks to Nature Canada for organizing the petition. (I signed! Did you?)

Sprague's pipit, one of the many
"species at risk" found in the reserve.