The report examines the path governments and farmers must navigate as we make our way toward Canada’s 2030 and 2050 greenhouse gas (GHG) emission-reduction commitments.  The report is the NFU’s submission to the federal government’s consultations on its target to reduce fertilizer-related emissions by 30%.

Nitrogen fertilizer is a crucial and valuable farm input that most farmers will continue to use.  But rapid increases in nitrogen tonnage in Canada and around the world are creating problems.  Canadian tonnage has almost doubled since 2006; Saskatchewan tonnage has quadrupled since 1992.  Qualman noted: “GHG emissions won’t go down if fertilizer tonnage continues to go up.”

He underscored the voluntary nature of the government’s 30% reduction target for fertilizer-related emissions, saying: “Contrary to rhetoric from some, governments are not proposing bans or forced reductions; governments are using incentives and cost-sharing programs to get farmers onside with voluntary efficiency measures and rate reductions.  Federal and provincial governments have allocated hundreds-of-millions of dollars to fund these voluntary cost-share programs.  And as governments help farmers use fertilizer more efficiently, farmers’ costs can go down and their margins can go up.”

The NFU report also details lack of competition in the fertilizer sector and potential profiteering. “Record-high fertilizer prices and company profits cut deep into farmers’ incomes.  We can reduce farmers’ dependence and vulnerability and reduce emissions at the same time,” said Qualman.

The world is at a crossroads, as humanity tries to mitigate climate change and halt biodiversity loss, while still securing a supply of food for everyone. Story here.

Recent years have witnessed a widespread and catastrophic decline in the number of forest elephants in protected areas in Côte d'Ivoire, according to a new study. Story here.

Almost 90% of terrestrial vertebrate species around the world might lose some of their habitat by 2050 as land is cleared to meet the future demand for food. However, according to a modelling study published in Nature Sustainability, proactive policies focusing on how, where and what food is produced could reduce these threats while also supporting human well-being.

Habitat loss driven by agricultural expansion is a major threat to terrestrial vertebrates. Projections based on human population growth and dietary needs estimate that we will need 2–10 million km2 of new agricultural land to be cleared at the expense of natural habitats.

Conventional conservation approaches — which often focus on a small number of species and/or a specific landscape — may be insufficient to fight these trends. Adequately responding to the impending biodiversity crisis requires location- and species-specific assessments of many thousands of species to identify the species and landscapes most at risk.

David Williams, Michael Clark and colleagues developed a model that increases both the breadth and specificity of current conservation analyses. The authors examined the impacts of likely agricultural expansion on almost 20,000 species.

They found that under current trajectories, 87.7% (17,409) of the terrestrial bird, amphibian, and mammal species in the analysis might lose some habitat by 2050, including around 1,200 species projected to lose more than 25% of their remaining habitat. Projected mean habitat losses were greatest in sub-Saharan Africa with large losses also projected in the Atlantic forest of Brazil, in eastern Argentina and in parts of South and Southeast Asia.

However, the authors also show that proactive policies, such as increasing agricultural yields, transitioning to healthier diets and reducing food waste, may have considerable benefits, with different approaches having bigger impacts in different regions.

The persistent decline in the number of farmers, farm size expansion, growing farm income inequality, and increased land concentration have other effects as well. Rural economies, communities, businesses, and services are also affected as there are fewer farm families to patronize local shops and services, while farmers lose their capacity to democratically influence governments and legislation as their voting numbers fall. Meanwhile, non-farmers lose their connections to farms and rural culture as fewer and fewer urban residents count farmers among their family members or friends. A series of policy measures are urgently needed to counter the market forces that will otherwise drive us toward even more concentrated farmland ownership and drive half of Canadian farm families off the land in the next one to two generations.

PHYS ORG
Historically, coal-fired power plants were the largest source of reactive sulfur, a component of acid rain, to the biosphere. A new study shows that fertilizer and pesticide applications to croplands are now the most important source of sulfur to the environment. Details here.
- August 10, 2020 No comments:

Email ThisBlogThis!Share to TwitterShare to FacebookShare to Pinterest
Labels: Agriculture

Nature - Agriculture
The dominant US crop plant has a voracious appetite for fertilizer, which leads to air pollution and health problems. More here.

Email ThisBlogThis!Share to TwitterShare to FacebookShare to Pinterest
Labels: Agriculture 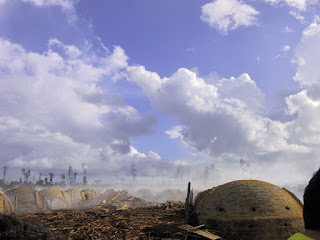 Producing charcoal in the rainforest.
By User Kelberul on de.wikipedia
A growing body of evidence indicates that the continuing destruction of tropical forests is disrupting the movement of water in the atmosphere, causing major shifts in precipitation that could lead to drought in key agricultural areas in China, India, and the U.S. Midwest. Story here.

Drought predicted for Alberta this summer

The Western Producer
Farmers in central and northern Alberta should brace for drought this summer, according to AccuWeather. Story here.
- May 04, 2017 2 comments:

New research announced by scientists at CABI (Center for Agriculture and Bioscience Information) confirms that a recently introduced crop-destroying armyworm caterpillar is now spreading rapidly across Mainland Africa and could spread to tropical Asia and the Mediterranean in the next few years, becoming a major threat to agricultural trade worldwide. Story here.

Are the Days of Some Farm Fertilizers Numbered, in The Battle to Fight Global Warming?

Manitoba Co-Operator
But soil scientist Mario Tenuta says there are things farmers can do to help themselves.
More here.


We need to start tilting the playing field back in favour of farmers and the environment. Story here.
- September 29, 2016 No comments:

NFU To Be Part of Climate Change Solutions in Manitoba

National Farmers Union
National Farmer Union (NFU) is working with the Manitoba government to develop new ways for the province’s farmers to reduce greenhouse gas emissions from agriculture, and to reduce the impacts of climate change on our farms. More here.
- March 10, 2016 No comments:

Get Ready For More ‘Weather Whiplash’

Manitoba Co-Operator
Unlike other regions, Manitoba may be able to benefit from climate change. Story here.
These were the soggy fields we drove by on Victoria Day last year, on the Trans Canada Highway west of Portage La Prairie (smack-dab in the middle of planting season): torrential rains most likely made worse by climate change. Does this look like the kind of weather that will "benefit" farmers? PinP video.


Rice has been at the centre of Japan’s economy and culture for centuries. But changes are afoot. There is growing concern among Japanese farmers that the country’s rice-producing capabilities are diminishing in the face of international trade pacts such as the Trans-Pacific Partnership. In fact, all local agriculture is in the spotlight as pressure mounts to increase local imports of overseas produce. Details here.
- February 08, 2016 1 comment:

Want to Find Out How to Invest in Sustainable Agriculture? Read On!

Increased investment in agriculture is critical. In a world confronting anticipated increases in food demand arising from a growing world population and changing diets, as well as potential decreases in food supply due to climatic changes and water scarcity, agricultural investment will prove crucial to addressing food security needs in the future. Story here.