Showing posts with the label The War on Tar
Show all

David Suzuki - The Guardian Pipes loaded on a train in Manitoba. A  PinP  photo.  There's a lot of fear around abandoning an industry that has been an economic driver for decades - yet the rest of the world is moving on. More here.
1 comment
Read more 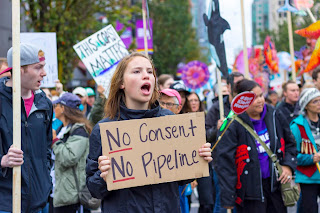 ricochet  One of the many protests against the Kinder Morgan pipeline in Vancouver. Photo by  William Chen. Groups say prime minister’s stance on tar sands negates attempt to position Canada as a global climate leader. Story here.
Post a Comment
Read more 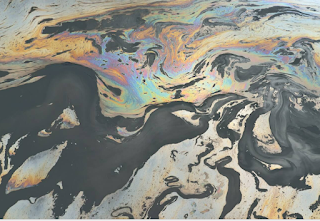 Bloomberg "Rainbow Lake" - Alberta tar sands. Photo credit - "Beautiful Destruction." Amid the bogs and forests of northern Alberta, in the heart of the Canadian oil patch, lie some of the largest waste dumps of the global energy business. Story here.
2 comments
Read more

- July 10, 2017
There are  1.2 TRILLION litres of toxic tailings pond sludge  in Alberta. And one tar sands corporation  is trying to postpone its share of the clean-up until 2085. We are going to stop this.   Tell Suncor its tailings mess can't wait 70 more years. Clean it up now. SIGN THE PETITION Larry, Right now, the biggest company in the Alberta tar sands is trying to  rewrite the rules of how big oil is going to have to deal with toxic tailings waste. Suncor is trying to get the Alberta government to allow it to wait to clean up its tailings until 2085. But it gets worse.  Suncor's strategy to "clean up" literally 525 billion litres of poisonous tailings sludge involves dumping it into a hole and capping it with water. That's it. This half-baked plan is nothing more than Suncor’s thinly veiled excuse to avoid cleaning up the after-party of a 50-year fossil fuel extraction binge fest. We have zero guarantees that corporations like Suncor will
Post a Comment
Read more

Canadians are making a supersized gamble on climate and the economy

NATIONAL OBSERVER Did you know that: We Canadians are now one of the world's largest extractors of climate pollution, per capita? We're planning one of world's biggest increases through 2030? Our relentlessly increasing extraction has become a supersized gamble that threatens both climate hope and our economic stability? DETAILS HERE.                          Part if the infrastructure awaiting approval of the  Keystone  XL pipeline. Photo by  shannonpatrick17
Post a Comment
Read more

- January 17, 2017
NATIONAL OBSERVER It’s a well-known fact that Charles and David Koch — owners of the second-largest private company in America — have been funding climate change denial in the U.S. for decades. Story here.
Post a Comment
Read more

Dear Larry, Tell President Obama: Stop the Dakota Access Pipeline! As you read this, thousands of Indigenous Peoples are camped along the banks of the Missouri River in North Dakota. They’re fighting to protect their land and water from the construction of the Dakota Access oil and gas pipeline. And it’s up to the President to decide.
Post a Comment
Read more

We Can't Let This Happen

Larry, In a matter of weeks, the Canadian government will approve or deny the Kinder Morgan tar sands pipeline. This decision could put the B.C. coast and our fragile climate at risk.  We’ve heard that the decision is coming soon and that the government is leaning toward approving the pipeline. There’s not a moment to lose. We can’t let this happen. It’s time to scale up our resistance.  Sign the petition to send Trudeau a message: climate leaders don’t build pipelines! Just last week, the 2015 Paris Climate Agreement came into force. The Trudeau government wants us to believe that we can meet our new climate targets  and  build new tar sands pipelines. But you and I know that’s not true. More than eighty-five tribes and First Nations are standing up to tar sands expansion, and we are standing with them.  Time is running out. The decision on Kinder Morgan is due in a few weeks. But together we can turn the tide and stop this devastating project.  Add your name to th
Post a Comment
Read more

- October 18, 2016
NATIONAL OBSERVER Salvage crews have removed more than 23,000 litres of diesel from a sunken tug on British Columbia's central coast, but a local First Nation said Tuesday that the damage has already been done and a lawsuit could be on its way. Story here.
Post a Comment
Read more

TransCanada Shuts Down Keystone After Oil Seeps to Surface

- October 13, 2016
NATIONAL OBSERVER Alberta-based TransCanada Corp has shut down its Keystone pipeline after crews spotted oil near a pump station in South Dakota, the company said in a statement on Monday. Story here.
Post a Comment
Read more

This Momentous Event - a Huge Indigenous Protest Over an OIl Pipeline, Predictably Got Precious Little Coverage in Major US Media. (Video)

(And what coverage there was, was distorted. - Video by Democracy Now.)
2 comments
Read more

- September 06, 2016
CommonDreams Merger 'would only enhance the power of the oil and gas industry to manipulate the energy marketplace and encourage the continued use of fracking,' says Wenonah Hauter. Story here.
Post a Comment
Read more

Oil, Gas And Coal Are Multi-Billion Dollar Businesses, Yet Every Year Fossil Fuel Companies get Billions in Tax Breaks and Handouts.