by Larry Powell
A west-central Manitoba man says his family got sick from exposure to chemicals from crop dusting planes this summer. 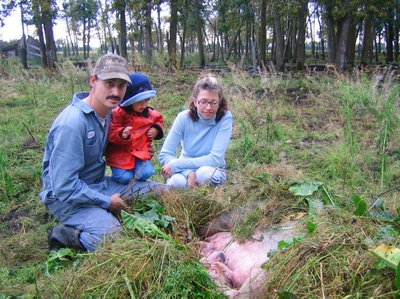 Lloyd & Donna Burghart. In the foreground, a sow with several piglets. PinP photo

Tens of thousands of acres in the Swan Valley, and around Roblin to the south, were sprayed with crop pesticides from spray planes in July and August, following a serious outbreak of Bertha armyworms, which destroy canola crops.

The Swan Valley area is in the far west region of Manitoba, near the Saskatchewan border.
Now, Lloyd and Donna Burghart of nearby Bowsman said they believe Lorsban (chlorpyrifos), an insecticide that was being sprayed on a canola crop across the road from them, has made them and their four children ill.

"I started shaking and a-sweatin' and I kind of was panicking and I didn't know … how severe the symptoms would be," Lloyd Burghart recalled.

"I didn't know if I was going to actually make it to the house."

The hog and cattle farmer described one August morning when he went into his yard to do chores. A stiff breeze came up and he was almost overcome by the strong fumes.

Burghart said he, Donna and their four children packed up and left the house for the next two days.

"When we ran out of the house, I could actually feel my chest tightening — and we were just from the house to the car getting all the kids out," Donna Burghart said.

"And then, [I] just didn't feel good for the next day or so. And our children, their eyes got infected and just red and bloodshot from it."

That week, all members of the family developed problems, including nausea, vomiting, bloodshot eyes, headaches and dizziness.

Ken Cameron of Ken Kane Aerial Spraying in Minnedosa, Man., said it's possible people on the ground could have been exposed to Lorsban, but he's not sure what can be done about it.

"Certain things can affect certain people differently, and I guess if the weather conditions are such that the fumes were blowing into his yard, that can affect him, and I'm not sure how you combat that," Cameron said.

An official of U.S.-based Dow AgroSciences, which makes Lorsban, told CBC News that it needs more evidence before any link can be proven between the Burghart family's ordeal and their product.

Hear the story as aired on the CBC.
The Burgharts also worry about their animals following the spray exposure.
- September 28, 2006 No comments:

It was a day in late July. A spray plane swooped low, dumping its payload of Lorsban onto a canola field in the Swan Valley, to control an infestation of Bertha army worms.
Nearby, the owner of a small acreage and her son were outside doing chores.
The woman says her son got a dose of what she calls the “direct drift.” According to the woman, both became “instantly nauseous with burning eyes.” Her husband developed the same symptoms, even ‘though he didn’t arrive home ‘till about 20 minutes after the incident.
They’re all are okay now, but she says she suffered from a low-grade headache for about three weeks afterward. (And she doesn’t normally get headaches.)

She even noticed one of her miniature horses became unusually listless right after the incident.
She says they now wonder whether they should even keep grazing the animals on the grass that has also been sprayed.

No one can seem to help them with advice.

The woman claims agricultural authorities were warning farmers before crops were in the ground not to plant canola, because the army worms would be severe this year. Much of that advice seems to have fallen on deaf ears.

The woman says when she turned to the local agricultural office for advice after her exposure, they “Didn’t do dick.” On the contrary, she was even met with hostility there!
And therein lies the saddest part of the tale; the arrogance of the powers-that-be that Big Agriculture can do no wrong. A virtual flood of complaints like this, albeit circumstantial, get shunted off as if they were coming from cranks or people who have nothing better to do.
Even reputable medical authorities who say there’s increasing evidence of serious, long-term effects from such chemical exposure are ignored.

So, are the people whose stories I have tried to document in these letters all cranks?
If they are, there must be a lot of them. The Aviation Control Centre in Winnipeg has apparently received more than 600 complaints this year about spray planes violating or ignoring regulations on buffer zones that are supposed to control where they spray and where they do not.

Is it now finally time to do something? You be the judge.

Are We in The Dark Ages?

"Crop-duster" at work in Manitoba. PinP photo. This plane sprayed the harsh and dangerous pesticide Lorsban this summer, right along a country road where children played moments before, near Roblin, Manitoba.

Fear of being shunned for opposing "progress," many concerned people will not speak up about such outrages. Farm papers who count on lucratice advertising from the chemical manufacturers, stay similarly silent.

"When the planes still swoop down to aerial spray a crop, in order to kill a predator insect with pesticides, we are in the Dark Ages of commerce.
Maybe one thousandth of this aerial insecticide actually hits the target insect. What is good for the balance sheet is wasteful of resources and harmful of life."Paul Hawken, "The Ecology of Commerce." 1993