by Larry Powell
For well over a century, invasive freshwater fish from Europe - carp (originally from China) - have been released, either deliberately or accidentally from fish farms, into Australian waterways. The fish, now widely regarded as pests, are thriving.
Their habitat includes rivers flowing through the Murray-Darling Basin of New South Wales. Those vast waterways support, through irrigation and other means, about 40% of agricultural production for the entire country - not to mention vital aquatic eco-systems and drinking water for about three million people.
By contrast, the clock is ticking for Australia's native freshwater turtles. The new study says the most common species has declined by up to 91 percent in the past 40 years. It blames urbanization, which damages their habitat and makes the turtles more vulnerable to mass die-offs from disease. They're also being run over by vehicles on roadways. And foxes, like the carp, also introduced from elsewhere, are destroying their nests.
Ironically, the scientists have now discovered that the turtles could play a vital role in any plan to rid the rivers of the nuisance carp. As carp die, they decompose and give off ammonia, which is toxic to other creatures.
An experiment the researchers carried out showed, convincingly, that the turtles could act as an effective "clean-up crew." Turns out, they have a huge appetite for the carcasses of the fish, a trait which would improve water quality, to everyone's benefit. 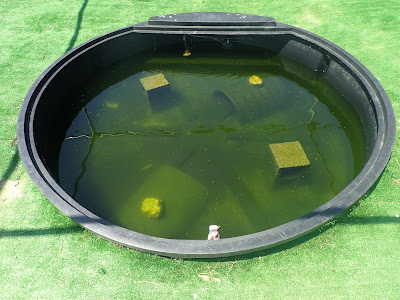 Day nine of the experiments - with turtles present in the water,
the carp carcass has been completely devoured.
Credit: Ricky Spencer and Claudia Santori.
The researchers built "artificial wetlands" made up of several large tanks like the one above. They placed dead carp in all of them. Then they put the turtles, in groups of four, in some. The tanks were monitored, either until the carcasses had fully decomposed or been completely eaten by the turtles.

The results, as documented in a study, now published in the journal, Nature,  are striking.

The turtles stripped carp carcasses to skeletons within five days, whereas, without turtles present, the carcasses took more than 27 days - more than five times longer - to decompose. In the tanks with the turtles, ammonia levels fell and dissolved oxygen levels - which aquatic animals need to survive, recovered. Without turtles, the water progressively deteriorated and became very dirty. While crayfish, prawns, and shrimp act similarly, none are as effective as the turtles.
The leader of the research team, Ricky Spencer of Western Sydney University, believes, a plan by the Australian Government to use a biological agent to get rid of the carp, could be devastating. That's because, without lots of turtles doing the scavenging, mounds of dead fish rotting in the rivers would only emit more ammonia and compound problems of water pollution.
“We’re not just talking about the health of our rivers here," Prof. Spencer adds.  "We’re talking about human health. These are river systems that supply our drinking water and irrigate the fruit and vegetables we eat. So turtles are critical to sustaining the health of humans, as well as our rivers.”
But, with turtle populations on the decline, finding enough to do an effective job, will be daunting. So, the research team is proposing what it calls "Australia's largest, community-empowered conservation program. Local communities will lead 'expansionary conservation,' where we aim to release more than one million extra turtles throughout southeastern Australia each year." A crowd-funding program has been launched to pay for the effort.
- September 17, 2020 1 comment: