Showing posts with the label Regernative Agriculture
Show all

- July 02, 2021
by Kate Storey - Citizen’s Climate lobby - Dauphin, Manitoba Farmers and ranchers are among those most affected by the climate, and yet agriculture is a contributor of climate changing greenhouse gas emissions.  As we work our fields and care for our livestock, it’s hard to imagine how our day to day farm decisions can have an impact on the atmosphere and on the heat, drought, floods, and weather extremes that affect our yields.  Farming activities can store carbon and nutrients in the soil and reduce greenhouse gas emissions. Farming activities can also release chemicals into the air that accumulate, destabilizing the climate we depend on.  Fortunately, there are climate friendly farming practices that are both good for the environment and good for farm net incomes. Although the choices that we make on our individual farms may seem insignificant, the widespread adoption of climate friendly farm practices can lead to an agriculture system in which emissions are reduced and carbon is ca
Post a Comment
Read more

Farming as nature intended. A “dynamic duo” from south of the border, brings a message of hope and radical change to producers on the Canadian prairies.

by Larry Powell A conventional farm in Manitoba. A  PinP  photo. "You're tilling too much!" That was Ray Archuleta's blunt message to about 50 people at a meeting this week in the small, farming community of Shoal Lake, Manitoba. The brilliant, affable Archuleta operates a small ranch in Missouri. His partner. Gabe Brown, whose "down home" personality has apparently earned him the monicker, "Farmer Brown," runs a big, mixed operation in North Dakota. Both men are on the same mission - convince as many farmers as they can to move away from conventional production. That's how countless producers in Canada, the U.S. and developed countries around the world, have, for decades, practised this predominant style of agriculture. They rely on heavy and expensive "inputs" of fertilizers, pesticides, machinery and "mono-crops," all designed to produce the highest yields possible.  Ray Archuleta conducts a  "slake t
Post a Comment
Read more

There's A Way to Save Our Future. So Why Aren't More People Talking About It? 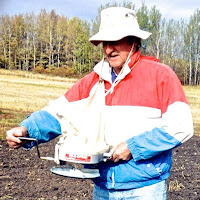