Showing posts with the label Democracy
Show all

University of Saskatchewan (USK) is taken to Court

Common  Dreams A fertilizer plant in Manitoba, Canada. A  PinP  video. Which is more frightening? The destruction of the environment and the climate that sustain human civilization as we have known it? Or the collapse of democracy and the rise of endless war and fascism?  More here.
Post a Comment
Read more 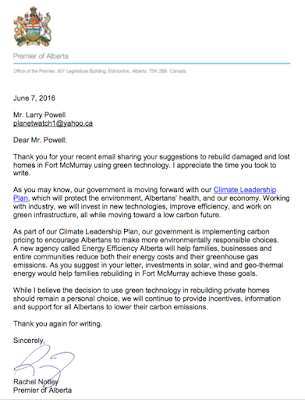 Alberta's Premier, Rachel Notley, has responded to my proposal to replace all buildings destroyed in the Fort McMurray wildfire with the most energy-efficient ones possible (see letter, below). While her answer to my specific suggestion seems to be a polite "no," she outlines other steps her province is taking to achieve a carbon-free future. Larry  For the background to this story, click here.
Post a Comment
Read more

- January 02, 2014
theStar.com Green Party leader Elizabeth May says the ballot-box question in 2015 should focus on what's happening to our democracy in Canada. Full story here. Related: " A Wakeup Call From Canada's Green Party Leader. Will Anyone Listen? "
Post a Comment
Read more

- April 07, 2013
Winnipeg Free Press Canadian democracy is under threat from its own government. Details here.
Post a Comment
Read more

- April 06, 2013
Murray Dobbin's Blog One of the many things that Hugo Chavez, the charismatic and revolutionary president of Venezuela contributed to the world was his demonstration for people everywhere the difference between democracy and liberal democracy.  Details here.
Post a Comment
Read more

- June 08, 2012
Council of Canadians. Tories attack Council of Canadians’ involvement in election fraud court cases In the latest twist of the election fraud scandal, lawyers representing the Conservative MPs fr om the seven ridings involved in the citizen-led legal challenges to overturn election results have filed motions to throw out the cases. The initial legal ski rmishes are now underway, and important developments are expected before the end of June. The Council of Canadians is supporting court challenges to overturn election results by nine electors who allege that they received a fraudulent call advising them of a change in their polling location, that these calls were made to other electors, and that this lowered the voter turnout to a degree that affected the outcome of the election. Several affidavits have been filed in support of these applications, including one from Frank Graves of EKOS Research, whose firm surveyed voters and concluded that there were
Post a Comment
Read more
More posts