Showing posts from May, 2016
Show all

- May 31, 2016
EcoWatch According to Australian scientists , more than a third of the central and northern Great Barrier Reef has died as a result of mass bleaching in the last three months. Story here.
Post a Comment
Read more

- May 31, 2016
CommonDreams The British Columbia project 'will emit at least 11.5 million tonnes of CO2 per year, not including downstream emissions when the gas is burned in Asia' Story here.
Post a Comment
Read more 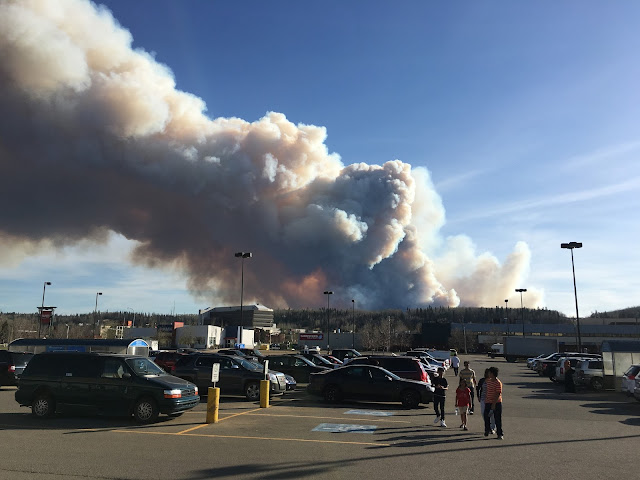 It all started when I wrote the letter, immediately below right after the Manitoba election in April. It was published in the Neepawa Banner and Roblin Review. It prompted an angry response in "The Review" from Brian Burtnack, which appears right after that. Then, my own response to Mr. Burtnack.  I've numbered the letters 1,2,3 & 4, putting them in chronological order. Happy reading! Larry ========= -1- Is Manitoba's New Government Already Failing the Environment? (Editorial) Dear Editor, Well, another Manitoba election has come and gone. And we got the change we wanted.  Or did we? To me, it still seems like the goal of “evidence-based” policy-making, often promised by politicians of every stripe, remains as elusive as ever. Take climate change, for example.  Except for the cranks, the pseudo-scientists pimping for Big Oil, those living on the moon or the stupid, the science is now accepted. It’s settled. Our e
Post a Comment
Read more 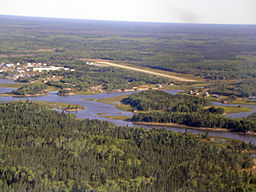 THE GLOBE AND MAIL The Bloodvein River within the planned heritage site. Photo credit - Wikipedia. A massive tract of boreal forest straddling the Ontario and Manitoba borders that is known as the “Land that Gives Life” to the Anishinaabe people is recommended to become Canada’s first mixed World Heritage site. Story here.
2 comments
Read more

My Way or the Highway - the EcoCannabis Car (Video)

- May 28, 2016
EcoWatch The Seacharger , a solar-powered boat built by “ a couple of hobbyists ” in a garage, will set sail for a solo, 2,000-mile ocean journey from California to Hawaii on Memorial Day. Story here.
Post a Comment
Read more

Monsanto Ordered to Pay $46.5 Million in PCB Lawsuit in Rare Win for Plaintiffs

- May 27, 2016
Nation of Change A St. Louis jury has awarded three plaintiffs a total of $46.5 million in damages in a lawsuit alleging that Monsanto and three other companies were negligent in its handling of polychlorinated biphenyls, or PCBs , a highly toxic and carcinogenic group of chemicals. Story here.
Post a Comment
Read more

Blogger Implores His Country to Make (at the Very Least) a Small, Symbolic Gesture in Defence of the Planet 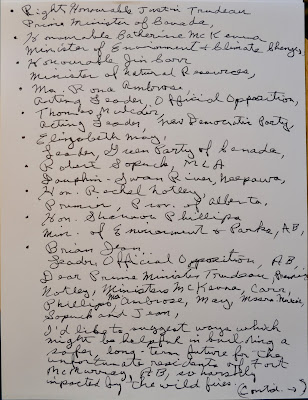 Dear PinP Friends, In hopes that Canada can make at least SOME SMALL GESTURE in the service of battling climate change, I have forwarded an idea on Fort MacMurray to the Prime Minister, Premier Notley and several officials in government and opposition . It simply asks that the new buildings which will replace the ones destroyed in the wildfire, be built to standards as energy-efficient (& fossil-free) as possible.  I have handwritten it in hopes it might be given more than a computer-generated response. After sending a surface-mail copy to the PM last week, and sending it out to all via e-mail yesterday (with the letter attached as a .jpg), I have received TWO computer-generated responses - one from the Alberta Minister of Parks, the other from the GPC. I'm going to post updates on responses I get as frequently as I am able, here on FB. Environmentally yours, Larry P.S. Please check the comments section of this story for responses received, so far.
2 comments
Read more

- May 26, 2016
NATIONAL OBSERVER The economy will be weaker than expected in the second quarter due to the Alberta wildfires , the Bank of Canada said Wednesday as it kept its key interest rate steady at 0.5 per cent. Story here.
2 comments
Read more

Alberta's on Fire and We Should be, Too

- May 25, 2016
NATIONAL OBSERVER The forests around Fort McMurray and the tar sands, the epicentre of Canada’s contribution to fossil fuel extraction and global greenhouse gas production, have been ablaze for many weeks, with a heat and ferocity not seen in living memory. Story here.
2 comments
Read more

- May 23, 2016
theguardian Arctic would warm by as much as 20C by 2300 with disastrous impacts if action is not taken on climate change, warns new study. Story here.
1 comment
Read more 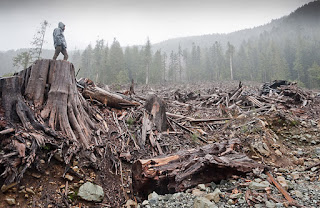 UN News Centre A clearcut in Canada. Wickimedia Commons. The environment is deteriorating faster than previously thought, making it imperative that governments act now to reverse the worst trends, says the most authoritative study the United Nations has ever published on the state of the planet’s health.  Story here.
Post a Comment
Read more

Will the Arctic Be Ice-Free Within the Next Two Decades?

Thousands of Tiny Red Crabs Wash Up on California Coastlines

- May 21, 2016
Eco Watch Thousands of red crabs are covering parts of California’s coastline. But this isn’t the first time. Story here. RELATED: "Why Are Fish Dying By The Millions?"
Post a Comment
Read more

A Third of Birds in North America Threatened With Extinction

No, the UN Has Not Given Glyphosate a 'Clean Bill of Health'

- May 16, 2016
London | Reuters — The herbicide glyphosate, sold by Monsanto in its Roundup product and widely used in agriculture and by gardeners, is unlikely to cause cancer in people, according to a new safety review by United Nations health, agriculture and food experts. Story here. RELATED: "No, the UN Has NOT Given Glyphosate a 'Clean Bill of Health!'"
2 comments
Read more

The Arsonists of Fort McMurray Have a Name - Editorial

- May 14, 2016
theguardian - Martin Lukacs Fossil fuel corporations are causing the climate change fuelling mega-fires – and they should be footing the bill for the devastation. Editorial here.
1 comment
Read more

- May 14, 2016
inside climate   news Concerned that carbon-heavy fuels would speed up global warming, the CEO put his trust in the United Nations and federal scientists to point the way to solutions. Story here.
Post a Comment
Read more

Millions of Dead Fish Washing Up on Vietnam’s Shores

- May 14, 2016
Eco Watch Vietnam  has a fish problem and the government isn’t talking about it. Since April, millions of  dead fish have been washing up on Vietnam’s shores. Story here.
Post a Comment
Read more

- May 13, 2016
the guardian National Farming Union’s application for banned pesticide use on oil seed rape crops is rejected as government rules against neonicotinoids for the first time. Story here.
Post a Comment
Read more

- May 13, 2016
NATIONAL OBSERVER The premiers of Ontario and British Columbia have both linked the Fort McMurray wildfire with global warming, while defending the importance of Canada's oil and gas industry. Story here.
1 comment
Read more 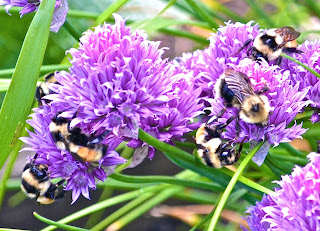 SumOfUs Bumblebees on Chives. PinP photo. Bees are dying by the million -- so what is Bayer, one of the world's biggest producers of bee-killing pesticides, doing about it? Details here. RELATED:   "New Studies Show Farm Chemicals Are Affecting More Than Bees. Bird Populations are Declining, Too. Is modern agriculture's hold on nature becoming a death grip?"
Post a Comment
Read more

How Rising CO2 Levels May Contribute to Die-Off of Bees 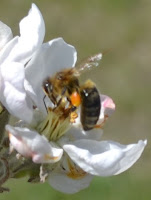 environment360 PinP  photo. As they investigate the factors behind the decline of bee populations, scientists are now eyeing a new culprit — soaring levels of carbon dioxide, which alter plant physiology and significantly reduce protein in important sources of pollen.  Story here.
Post a Comment
Read more 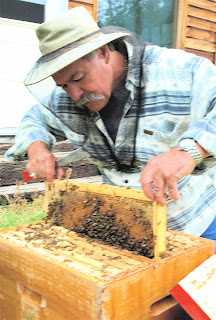 Nation of Change  Canadian beekeeper Tim Wendell.  PinP photo The Bee Informed Partnership, in collaboration with the Apiary Inspectors of America and the U.S. Department of Agriculture, report losing 44 percent of their total number of colonies managed over the last year—close to the highest annual loss in the past six years. Story here. NOTE: Latest available figures show Canada in much better shape. According to the Canadian Association of Professional Apiculturists, colony loss here, nationwide over the winter of 2014-15  was just 16.4%.
Post a Comment
Read more

- May 12, 2016
WORLD RESOURCES INSTITUTE Fires are a natural part of many boreal forest ecosystems, but…. Story here.
Post a Comment
Read more

Why are Fish Suddenly Dying by the Millions? 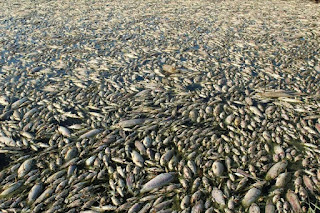 Nation of Change A massive fish die-off in Brazil.  Ana Perugini  Hortolândia, Brasil Over the past several months there has been an alarming number of dead fish and other sea creatures washing up all over the planet. In many places more than 30 tons of fish have washed up dead. Story here.
Post a Comment
Read more

- May 11, 2016
New York Times Scientists say the near-destruction of Fort McMurray last week by a wildfire is the latest indication that the vital boreal forest is at risk from climate change. Story here.
Post a Comment
Read more

Fort McMurray and the Fires of Climate Change

- May 09, 2016
The New Yorker Though it’s tough to pin any particular disaster on climate change, in the case of Fort McMurray the link is pretty compelling. Story here.
Post a Comment
Read more

Pipelines Not The Pathway to Paris Solutions

Times Colonist PinP photo Canada’s symbolic signing of the Paris climate agreements Friday was a hopeful and necessary step. Yet symbolism and rhetoric need to be followed by urgent action here at home if we are serious about avoiding a catastrophic four to six degrees Celsius of warming. Story here.
Post a Comment
Read more

Climate Hawk Mourns for Fort Mac…and Many Others

- May 07, 2016
The ENERGY MIX In a remarkable analysis distributed by email Thursday, Dale Marshall, National Program Manager at Environmental Defence, connects the tragedy unfolding in Fort McMurray with climate disasters and dislocations around the world. Story here.
Post a Comment
Read more

Did Climate Change Contribute to The Fort McMurray Fire? 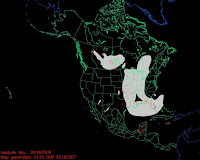 MACLEAN’S Smoke  from the Fort McMurray fires has now spread over the eastern Canadian prairies and much of the US. NOAA map. Experts say forest fires are more frequent, and more intense, due to climate change. Story here.
Post a Comment
Read more

- May 06, 2016
BILLINGS GAZETTE An oil and natural gas field in the western United States is largely responsible for a global uptick of the air pollutant ethane, according to a new study. More here.
Post a Comment
Read more

- May 04, 2016
A view from the south... Common Dreams 'There was smoke everywhere and it was raining ash,' says Fort McMurray evacuee. More here.
Post a Comment
Read more 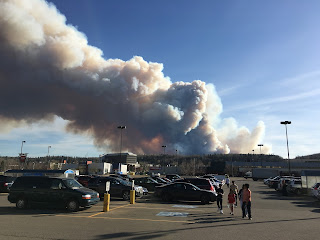 by Larry Powell Well, another Manitoba election has come and gone. And we got the change we wanted.  Or did we? To me, it still seems like the goal of “evidence-based” policy-making, often promised by politicians of every stripe, remains as elusive as ever. Take climate change, for example.
1 comment
Read more 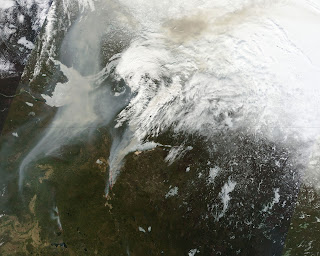 CBC News Alberta has had many severe wildfires over the years. While none has been quite as bad as Fort McMurray, the smoke from this one in 2011 near the Alberta-Saskatchewan border, could be seen from space. (NASA photo.) Thousands of people are fleeing Fort McMurray as wildfire leaps highway and into city. More here.
Post a Comment
Read more 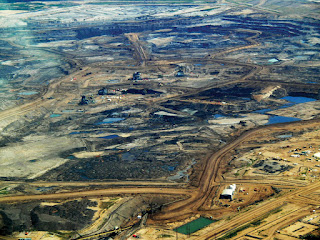 Historic Ivory Burn Covers the Sky in Smoke and Ash

- May 01, 2016
Greenpeace Canada There is a growing  call for the federal government to investigate Imperial Oil , the Canadian arm of ExxonMobil, for its role in the oil giant’s global effort to spread doubt about climate science and delay policy action by governments, even though the company’s own researchers were telling them that global warming was a serious threat and the company was adjusting its operations in the Canadian Arctic to deal with a warming world. More here.
Post a Comment
Read more

- May 01, 2016
Eco Watch It is possible to produce enough food to feed a growing population without another tree being felled, according to new research. But there’s a catch. More here.
1 comment
Read more
More posts