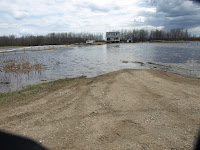 In the community of Eriksdale, north of Winnipeg, flooding is now threatening homes, the hospital and personal care home.

A farm home near Yorkton, SK, isolated by floodwaters.

A flood warning is in effect for the Dauphin Lake Basin, including Parkland and the Duck Mountains, especially once the snow melts & there's lots of that yet to come. Runoff from Riding Mountain has already increased the flows of the Valley, Vermillion and Ochre Rivers significantly. The Turtle River has risen by over a meter (4 ft) since Monday!

Runoff from both the "Ducks" and Riding Mountain are adding significantly to the flow of the Assiniboine River. Because of a swollen Assiniboine, points downstream, St. Lazare, Brandon, Portage and Winnipeg are still under a continuous and prolonged flood watch. Conditions on the Assiniboine have been affected by the same blizzard and heavy rains which struck a wide area last weekend. 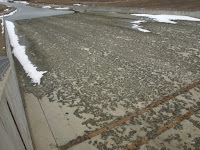 The huge Lake of the Prairies near the Saskatchewan border (the Shellmouth Reservoir) was "drawn down" to extremely low levels in recent weeks to accomodate expected crests from upstream.

Those crests have now arrived and 10,000 cubic feet per second is now flowing over the dam and will be for the next couple of days! (see video - May 3rd.)

As has already been stated in this space, this is the largest flood, in area, ever recorded in this province. Flood waters affect communities in virtually all parts, from the Pas, south. Cool weather and wet conditions will mean continued flood misery well into the summer.

Hundres of people remain displaced, hundreds of roads are closed and scores of "states of emergencies" have been declared.

Flooding on the Red is described as the 3rd worst in a-century-&-a-half.
at 10:39 No comments: Links to this post