TO PLANT OR NOT TO PLANT! by Larry Powell

The value of planting trees was questioned at a public meeting in Rossburn, MB on Feb.21st. Perhaps up to a hundred people were there, including several students from local schools.
The meeting was called to examine how climate change might affect agriculture.
Two speakers at the meeting actually challenged the role of tree-planting as a way to absorb harmful greenhouse gasses. 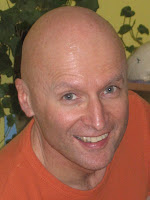 Curt Hull of Climate Change Connection, one of the meeting's guest speaker, said trees may absorb such gasses during their life-cycle, (through a process known as "sequestration) but actually put it back into the air when they die and decay. *(See his more detailed explanation, and another view from the PFRA below.)
Another speaker, Leloni Scott of Manitoba Agriculture and Rural Initiatives, agreed. Ms. Scott claimed tree-planting is over-rated as a way to "sequester" gasses.

Unconventional Wisdom?
Those statements clearly came as a surprise to several people in attendance,including one of the teachers, Audrey Clempson. Ms. Clempson, a Grade 7 teacher at Rossburn Elementary, said after the meeting, her students who were there with her, have been on tree-planting projects themselves. She says both she and her students "wondered" about the statements that tree-planting may not be as helpful in the fight against climate change as previously believed. She says she has written a letter to the Biosphere Reserve asking for clarification.
To Spray or not to Spray?
One farmer in the audience claimed that, rather than causing global warming, farms actually absorb carbon dioxide through the trees and shrubs on their property.
Another person asked why, then do farmers often launch large programs to spray pesticides and kill trees which encroach on pastures used for grazing cattle. 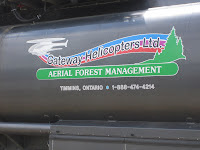 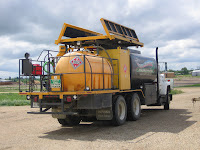 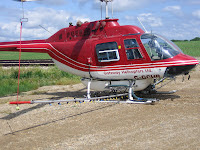 This Ontario-based "fleet" uses Roblin MB as its base to "kick some (poplar tree) butt in what is euphemistically called "forest management."

Uncertain Future.
Some speakers suggested the global phenomenon of climate change may even spell opportunity for farmers, bringing an extended growing season and an increase in productivity.

But Hank Venema of the International Institute for Sustainable Development, (a Winnipeg-based think-tank) warned that the future is not really that easy to predict. Except for the dust bowl of the thirties, Dr. Venema noted the 20th century was unusually wet. But, given the severe weather events which are hallmarks of climate change, we may just as easily face serious drought in the years ahead.
He reminded the audience of our rapidly vanishing glaciers which supply much of the water for the rivers which flow from the mountains across the prairies.
Farming has profoundly altered our prairie landscape, Venema went on, and necessarily so from the point of view of economic development. But he wondered if we have now gone too far. He urged that more natural areas, such as wetlands be preserved and perhaps expanded because they act as buffers against the extremes of global warming.
He noted that, just a few years ago, a severe drought in much of Saskatchewan left many producers short of hay bales for their livestock. It led to the now-famous event in which producers in central Canada shipped bales west to help out. Dr. Venema says Ducks Unlimited released many Saskatchewan wetlands from their protected status in order to free them up for hay production. That was a move which revealed the critical importance of such areas by helping many local producers, he said.
-30-

CURT HULL* "Every living organism has a net zero effect on carbon sequestration. As a tree grows from seed, it draws carbon out of the air and soil and converts it into all of the proteins and fibres and other elements in its makeup. As its leaves, and eventually when its branches and trunk die and decompose, all of that carbon is released back into the environment.
We add to the carbon sink (i.e. we add to the amount of carbon drawn out of the atmosphere and "sequestered") when we create new forests.
A forest is like a bank - a carbon savings account. In a healthy forest, some young trees are growing, some old trees are dying, but there is more carbon sequestered than when there was no forest there at all. When we prevent forests from being destroyed, we allow that carbon to "stay in the bank".
When we burn fossil fuels, we are actually burning ancient forests. Before we burn it, the oil contains carbon that was drawn out of the atmosphere millions of years ago." Curt Hull.
___________________
JOHN KORT PhD
"Dear Larry:

I do have a few comments that I hope may be helpful. I hope that they come across as simple common sense.

There was a statement on your blog that the Grade 7 teacher was concerned that “…tree-planting may not be as helpful in the fight against climate change as previously believed.” Similarly, there was a statement in your message below that trees are “over-rated” as a way to sequester carbon. It begs the question – What do people believe and who’s doing the over-rating? It may be that people have unrealistic expectations about trees – I don’t know. However, nobody should doubt that growing trees absorb carbon dioxide. Photosynthesis is that marvelous process by which plants turn CO2 into carbohydrates and O2.

Of course Curt Hull is right and individual trees have a finite lifespan (some very long) and, when they die, the carbon that they contain has to go somewhere. At equilibrium, a forest ecosystem will have the rate of carbon taken up in tree growth balanced by the rate of carbon loss in tree death and decay. In this case, the forest has a lot of sequestered carbon and it is a carbon reservoir but it is no longer a carbon sink. It would become a carbon source if a forest fire roared through it.

Dry wood is very close to 50% carbon so a forest, including the roots, really does sequester a lot of carbon. Vigorously growing trees are a carbon sink, and the amount of carbon that a tree sequesters every year can be calculated as 50% of its net biomass increase. Interactions with its surroundings may cause some further carbon increases or decreases in the other vegetation in their vicinity. Trapped snow or shelter may increase the productivity of other plants while competition for water, nutrients and light could decrease the productivity of other plants.

People can therefore avoid “over-rating” the sequestration benefits of trees by learning the basics of the carbon cycle.

An important thing to consider is the fate of the wood. If the wood gets buried or is used to build a house, the carbon that it contains lasts well beyond the tree’s lifespan. But, in any case, sequestering carbon in trees is a measure that is effective for a limited period. If we continue to burn fossil fuels in the meantime, we have to know that trees will not compensate for the new CO2 that we’re putting into the atmosphere.

But using the trees as a bio-fuel would allow us to substitute for the fossil fuels. If we plant trees at the same rate as we harvest them and burn them for their energy, the carbon that they release when burned should be balanced by the carbon they absorb from the atmosphere – a closed loop. So maybe “brush management” should consist of sustainably harvesting the encroaching trees and shrubs and using the wood as a bio-fuel, assuming we have efficient bio-fuel burners installed.

One final comment about trees dying and decaying: we need some dying and decaying trees in our ecosystems as habitat for birds, mammals, insects, micro-organisms, etc. This may indeed detract from their value as a carbon sink but it’s important to keep biodiversity on our agricultural landscapes."