"HEAT AND HOPE: TIME RUNNING OUT FOR STEEP EMISSION CUTS" 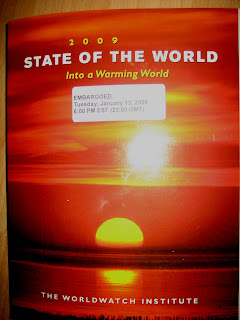 Jan. 13-'08 by Larry Powell http://www.worldwatch.org/ A large, well-respected research organization believes the world will actually have to end carbon dioxide emissions altogether by 2050 if we want to avoid "catastrophic" climate change and a planet which is "hostile to human development and well-being." *The Worldwatch Institute makes the sombre predictions in its 2009 "State-of-the-World" report entitled, "Into a Warming World." Despite all of this, the 47 scientists who wrote the report believe there is still plenty of opportunity for "efficiency improvements" in such fields as renewable energy, farming and forestry; improvements that will "slow and manage" climate change. While disaster can still be averted, "There's not much time left." Only with massive public support, political will to shift toward renewable energy, new ways of living and "a human scale that matches the atmosphere'
Post a comment
Read more
More posts