Battle in the Boreal. Rekindling the Air Quality Debate 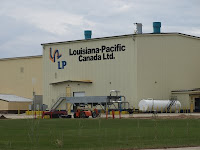 An update - by Larry Powell Public meetings in Swan River, Manitoba later this month, will revisit the explosive issue of pollution controls at a big wood products plant (l.) in the Swan Valley. Just as they were in the mid-'90s, battle lines are drawn between citizens, environmentalists, the US-based Louisiana Pacific Corporation (LP) and the Government of Manitoba. That's because LP wants to permanently shut down the devices which control most toxic emissions from its plant, called "regenerative thermal oxidizers" or RTOs. LP emissions, as seen from the nearby countryside. (Photos by Larry ) Manitoba's Minister of Conservation, Stan Struthers, quietly gave it permission to do so, temporarily, last January. Struthers has since instructed the Clean Environment Commission (CEC), an arms-length advisory agency, to determine whether a permanent shutdown is justified. Whether temporary or permanent, members of the environmental group, "Concerned Ci
Post a comment
Read more
More posts