No federal regulations specifically govern the disposal of
power plant discharges into waterways or landfills...
USDA photo
at October 23, 2009 No comments:

Berkeley, CA-Robin Bryan, a 21-year-old student at the University of Winnipeg, will be
among the six recipients of the 2009 Brower Youth Award. Hosted by Earth Island Institute, the Brower Youth Awards are North America's most prestigious prize for young environmental leaders. 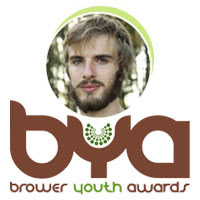 Bryan fought for years as a campaigner with the Wilderness Committee to put an end to industrial logging activity within the boundaries of provincial parks in Manitoba. Originally from Prawda, Manitoba, Bryan is now completing his degree at the University of Winnipeg.
MB Wildlands
While attending school full-time, Bryan organized rallies, spoke with elected officials, delivered classroom presentations about the issue, fundraised tirelessly,
and organized volunteers to write and collect 20,000 letters to the government.

Bryan lives in close proximity to the world's largest single land storehouse of carbon and most abundant source of fresh water, the boreal forest of the East Shore Wilderness Area in Manitoba and Ontario, Canada. As a young activist canvassing with the Wilderness Committee, he "began to realize just how much is at stake both locally and globally if the ecology of this province isn't protected in historic proportions. I also began to realize just how unregulated and destructive industrial logging and mining have been in Manitoba. If I didn't begin to dream big, act fast, and lead by example, I felt that I would have to sit back and watch a historic opportunity to stand up for public lands and protect the second largest wild area in the biosphere pass me by."

In 2008, Bryan was rewarded for his efforts when the Manitoba Legislative Throne Speech banned logging in four of the five parks with logging operations. Bryan is now actively campaigning for the protection of the Eastshore Wilderness, encompassing over 100,000 square miles of Ontario and Manitoba.

In October 2009, Earth Island Institute's Brower Youth Awards will celebrate its tenth anniversary of spotlighting North America's boldest young environmental leaders. Bryan will join five other environmental leaders under the age of 23 in receiving the Brower Youth Award and a $3,000 cash prize for their achievements, while being recognized at a gala celebration in San Francisco on October 20, 2009, with 900 individuals in attendance.

The six winners were chosen from more than 125 applicants for their creative and effective work tackling problems ranging from food justice to deforestation, global warming to pollution. The thirteen judges for the award are leaders in business, journalism and the nonprofit sector, including Josh Dorfman of The Sundance Channel's "Lazy Environmentalist", Judith Helfand, the director of the global warming film "Everything's Cool", and Philippe Cousteau, CEO of EarthEcho International and grandson of Jacques Cousteau.

In the first ten years of the program, the 61 current and past award recipients have raised more than $1.4 million for environmental causes, trained more than 3,000 youth in advocacy, involved more than 32,000 in projects, implemented 20 university-wide environmental policies, passed eight pieces of legislation, organized more than 3,300 events and actions, produced more than 20 documentary films, and held 500 plus lobby meetings with elected officials.

The Brower Youth Awards are generously supported by Earth Island members, as well as Visa, Clif Bar, and Klean Kanteen. More information about the Award recipients and the Award is available at http://www.broweryouthawards. org/2009media.
at October 23, 2009 No comments: