Standing the Precautionary Principle on its Head 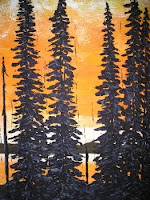 The Manitoba Government Celebrated '09 by Allowing Industrial Pollutants to be Released in the Swan Valley - by Larry Powell (Double-click headline for latest story on this topic.) It was a fateful decision. One year ago tomorrow, Stan Struthers, who was then Manitoba's Minister of Conservation, said "yes" to a request from Louisiana Pacific Canada Ltd (LP). As a cost-cutting measure, the corporation wanted to permanently do away with devices called regenerative thermal oxidizers, or RTOs, which have helped control toxic emissions from its plant at Minitonas since it opened in the mid '90s. The plant makes "oriented strand board," a type of sheeting used in house construction. It is made from hardwood trees the corporation harvests over a wide area of western Manitoba, including the Duck Mountains. "Evening in Duck Mountains." Painting by Mary Jane Eichler. That permission from the government, first said to be temporary, set in m
1 comment
Read more
More posts