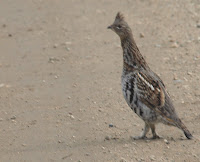 May 10, 2010 by Reuters
World Governments Fail to Halt Biodiversity Loss by Janet Lawrence
"The distinctive drumming of the ruffed grouse (r.) is a sound heard in fewer and fewer locations as suburban sprawl, expanding agriculture and commercial development rob this elusive game bird of habitat. As man builds to accommodate the expansion of his own race, the habitat of the ruffed grouse is seriously threatened." Cdn. Ruffed Grouse Society.
at 20:27 No comments: Links to this post