The Accountability Act has already been given 3rd reading in the Commons. Below is a joint letter from a coalition of environment groups, urging the Senate to pass it, too. l.p.
=====

The climate crisis represents the most urgent challenge of our time. Reducing emissions of greenhouse gases is essential to avoid catastrophic changes in our climate that threaten millions of people with drought, famine, extreme weather events and rising sea levels. By acting decisively to reduce its emissions, Canada can also be a leader in energy conservation and clean, renewable energy. We can ensure our economy remains strong and competitive. You have an historic opportunity and responsibility to tackle this issue which is now before you.

We are asking all Parliamentarians to join together to ensure that Bill C-311 (The Climate Change Accountability Act) becomes law. Bill C-311 will ensure that Canada follows the best scientific analysis of the Nobel Prize-winning Intergovernmental Panel on Climate Change by setting science-based targets to reduce emissions of greenhouse gases, and by requiring effective accountability measures to meet those targets.

Passing this crucial legislation will send a clear message to the world community: Canada is prepared to show leadership in tackling climate change. We can protect our children and grandchildren from catastrophic changes and embrace opportunities in the clean energy economy of the future by investing in renewable energy and energy efficiency. We hope you will take action now to ensure that Canada plays a leading role in stopping dangerous climate change and making the global transition to a low-carbon economy. 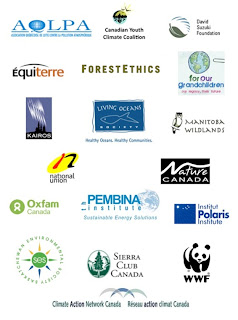 Editor's Note: Are factory farms rearing their ugly heads again? l.p.
at May 22, 2010 No comments:

Editor's note: Needless to say, our mainstream media are once again ignoring or playing down this important new report, opting instead to faithfully record every burp and fart on the stock markets, no matter how insignificant. l.p.