One Year After Ontario Ban: Over 80% Decline of Most Common Pesticides in Surface Waters

If you enjoy this blog, please consider
donating to the author to keep it going.
Just click on the link below.
Thanks! - Larry

ROBLIN, MB Jul 8 -2010
I began worrying the other day about my last story on this topic "Are Pesticide Regulators on the Take?".
Bee photo by l.p.
In it I raised some hard questions about the behaviour of those who are supposed to protect you, me and our environment from harmful pesticides in Canada.
A mounting body of evidence shows several such products are killing valuable pollinating insects like bees, essential to the production of many of our food crops.
Their populations are crashing alarmingly in many regions of the world, including Canada.


Yet our politicians and "regulators" party on, allowing bee-killing poisons to continue in heavy use, as if none of this was going on.


Still, I worried, had I been too harsh? Too provocative?


Then, the other day, I read something which made me wonder if I had been harsh enough!


According to The European Media Research Centre (EMRC), both the health and numbers of honey bees in Italy rebounded dramatically last year. It was the very first year the Italian government suspended the use of a particularly nasty family of pesticides (neonicotinoids), used to treat corn seed. In contrast, oceanic amounts continue to be used with reckless abandon in Canada ("the true North strong and free").


The EMRC describes itself as an independent, non-profit organization which provides journalistic content for many TV stations. It researched and published the story a-year-ago this summer. True to form, our "industry-friendly" media here in North America apparently saw fit not to report it widely, if at all, on this side of the ocean!


I then contacted both the President of the National Union of Beekeepers in Italy, Francesco Panella and Moreno Greatti of the Department of Plant Biology and Protection at the University of Udine, to verify the accuracy of the story. (Both were quoted in it.)


Panella confirmed that in Piedmont, his region of northern Italy, the bees developed "very well" in the spring of 2009 and this past spring, too. There, only "neonic-free" corn seed was planted.


Despite lawsuits from the chemical industry, the Italian government has prevailed and kept the suspension in place. 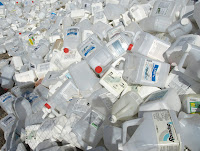 Pesticide container disposal
site in western MB. PLT photo
And, Panella added, industry warnings that the suspension would result in drastically reduced yields, have not materialized.


He says there were modest losses to pests, but only in areas where mono cropping was common. In places where crop rotations were used, "there was no damage, and no need for chemicals!"
For his part, Prof.

Greatti (r.)told me, "In North Italy, where the corn is the most important crop, the bees did not die in 2009, and the same thing happened this year (second year of ban)."

Corn itself will produce without pollinators. But, in research described by some as "pivotal," Prof. Greatti has shown that bees ingest the poison by sipping dew from the corn leaves or grasses along fields planted with the treated seed.


So, just how much longer can Ag Canada and Health Canada keep their heads buried in the sand, ignoring this mounting evidence?


Keep in mind, the Government of Manitoba also has the power to suspend the use of pesticides, if it had the political will. Obviously, it does not, choosing instead to act as an agent for rich and powerful corporations like Bayer Crop Sciences, the brains behind neonicotinoids.


How much longer are we prepared to let these government agencies act as handmaidens to the chemical industry instead of protecting the interest of we, the people like they are supposed to?

COMMENTS: "Great article. Thanks for bringing awareness. Yes chemicals are poisoning everything. We should go back to the old ways and half the population would not be so fat and so sick. Pollenation is the essence of agriculture and horticulture. By the way love the photo used. Rated up. Keep writing." mrspleats, Toronto, CA
===
"Thanks, Larry, keep up the good work. I used to have sprays on 2 sides of my 1& 1/2 acres, but now the pasture on the other 2 sides was converted to corn & soybeans, and I can't overwinter honeybees. They are too weak from sprays to make it through the winter. To me, 'chemical farmers' aren't farmers, they are killers."


=== Andrea Fox wrote on July 14, 2010, 12:39PM : "Larry, GREAT story, I am so glad to hear about Piedmont's success. Finally a positive story that there is hope against CCD! If anyone in the region published a paper on the 2009 season, perhaps we could share the data with our legislators--U.S. and Canada. Maybe that would help them better understand what we're facing." -Andrea

Ag Input Sales Slump Due to Heavy Rains on Prairies