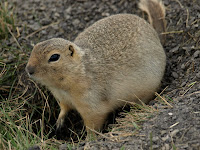 Implications for Many Creatures That Hibernate ScienceDaily (July 22, 2010) — Could populations of these "gophers" (Richardson's ground squirrels), be about to explode, too?) l.p. photo
Post a comment
Read more

EDITOR'S NOTE: Let's get behind movements like these and stop this grinning jackass in his tracks! l.p. http://www.canadians.org/action/2010/RTW-June-18.html Updated July 6, 2010 After years of hard work, there has been a breakthrough in our right to water work at the United Nations. Several countries are prepared to support a resolution on the right to water which is likely to be voted on at the end of July. Council of Canadians Chair Maude Barlow, and Blue Planet Project Organizer Anil Naidoo have been speaking to international delegations urging countries to support the resolution. Unfortunately, Canada appears to be obstructing the process. It will be crucial that we get as many letters to the Canadian government over the next few days demanding that Canada support the right to water. Please join us in sending the email below to Stephen Harper. http://www.canadians.org/action/2010/RTW-June-18.html
Post a comment
Read more
More posts