Is Climate Change a Four-Letter Word? 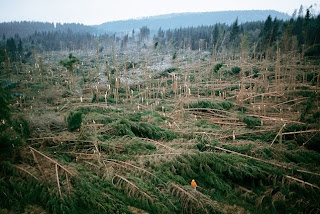 Roblin Manitoba, CA - by Larry Powell If it isn't a "dirty" topic, why then do so many people seem to prefer to walk on hot coals rather than talk about it? I happen to be one who believes climate change is not only real and affecting us now, but is caused by the way we live on this earth as humans. But don't take my word for it. That is exactly what the world's best scientific minds have been telling us for years. But nobody seems to be listening; or, even worse, refusing to hear! And what about the skyrocketing number of deadly storms, both around the world and here on our own doorstep ? I've either been seeing them in the news, a lot, or experiencing them, first hand. Haven't you? Trees brought down by the storm in the Vosges forest, France De. '99 Courtesy of the Yann Arthus-Bertrand Galerie I have sometimes tried to get people to tell me what they believe might be behind all this weird weather. (I'm usually met with stoney sile
2 comments
Read more
More posts