Au 24-2010 - by Larry Powell
Important recommendations on what the Manitoba Government should do about controlling pollution from a big wood products plant in the province, are now in the hands of the Minister of Conservation, Bill Blaikie.

Certain toxic emissions have apparently been escaping into the air around the plant, near the Village of Minitonas, since that time. The Commission will recommend that the devices should either be started up again, or closed permanently.

The agency says it submitted its report to Blaikie on Aug. 16th, but, he was away, so wouldn't have seen it until he got back on the 23rd. Cathy Johnson of the Commission says she believes the Minister could possibly release it "in early September."

It will be up to him to make the final decision on the recommendations.

Please also read my earlier story: "The Great Debate Over Air Quality in the Swan Valley Reaches a Climax."
at 11:05 No comments: Links to this post

Dear Editor, I find media coverage of Prime Minister Steven Harper's current tour of the north, appalling. If I heard the CBC correctly this morning, our Prime Minister is "putting emphasis on science" in his approach to northern development!

An emphasis on science?

The sad fact is, this so-called leader of ours has been spitting on science and scientists ever since he came to power. He has been appointing "climate-denying" oil and gas toadies as his "science advisers" while being nothing but criminally negligent in his approach to the crisis of global warming. 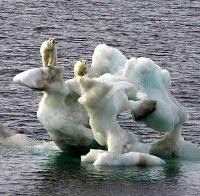 As our "True North" melts around the people and creatures living there, Harper parades about, peddling "Arctic sovereignty" as some kind of opiate we can all use to avoid the harsh reality of climate change.

No doubt Harper has a greedy eye on the petroleum bonanza that lies beneath melting permafrost and the ocean's surface, now made more accessible with quickly disappearing sea-ice. While this approach might extend the supply of this unsustainable energy source, it will also surely guarantee that global warming will do nothing but worsen, with consequences I personally would rather not think about.

Apparently the media tagging along with him see themselves as little secretaries, faithfully recording his every utterance while turning a blind eye to the changing world around them.

I just hope they didn't get wet in the deluge of rain or blown away by the 100 K winds which were supposed to hit Churchill while they were there!

Larry Powell Roblin MB
at 10:26 No comments: Links to this post