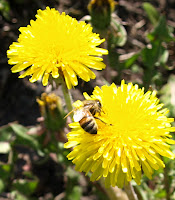 by Larry Powell    The group representing beekeepers in this country says 21 percent of honey bee colonies in Canada were lost over the winter of 2009-10. The Canadian Association of Professional Apiculturists (CAPA) says, of the 611,972 "over-wintered" colonies, 128,463 were dead or unproductive by spring.  According to these latest CAPA figures, belatedly released just this past Friday, this represents 1.4x the long-term winter loss rate for Canada.  The Association describes this as a substantial improvement over the previous three-year period during which losses averaged 32.6%. CAPA credits beekeepers' effective use of mite control products in the improvement in colony losses. It adds, "extension professionals" also attribute such improvement to a new mite-control product called "Apivar," approved for use last fall. CAPA tempers its optomitic message with this note of caution, however. " Though encouraging, it is too early to det
Post a comment
Read more