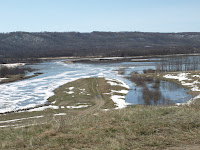 Manitoba News Release - May 8, 2011 - FLOOD BULLETIN #38 - Manitoba Water Stewardship reports: *    A three-day unstable weather system is expected to bring widespread rain ranging from 20 to 50 millimetres across the entire southern Manitoba watershed.  The Assiniboine River, just below the Shellmouth Dam. Due to recent rain, soils have a reduced capacity to retain water and any further rain will likely run off into streams and rivers.  *Communities along the Assiniboine River between Portage la Prairie and Headingley are advised that water levels along the river will be increasing in approximately two to four days.  The unprecedented flows are a result of last week's weekend storm, the timing of the melt from the storm and additional rainfall forecast for this week.   *Water levels on the Assiniboine River at the First Street Bridge in Brandon are 1,182.17 ft., an increase of 0.87 ft. since yesterday.  *    Protective dikes in Brandon are being raised another t
Post a comment
Read more
More posts