The Province of Manitoba is distributing this release on behalf of Manitoba Hydro, Nissan Canada and the Province of Manitoba. News Release - May 27'11 An electric (not necessarily a Nissan) car - IEA photo Zero-emission Vehicles Key To a Fossil Fuel-free Future:  Chomiak The Province of Manitoba and Manitoba Hydro are entering an agreement with Nissan Canada to work together on initiatives that will help advance the use of plug-in electric vehicles in the province, Innovation, Energy and Mines Minister Dave Chomiak announced today. "Manitoba has a roadmap for a fossil fuel-free future and this agreement is another strategic partnership that will help move us along that pathway," Chomiak said.  "Electric vehicles could present a significant opportunity to help reduce greenhouse-gas emissions in Manitoba and benefit our economy by allowing us to replace imported fossil fuel with our own clean, renewable hydroelectricity as an affordable energy source
Post a comment
Read more 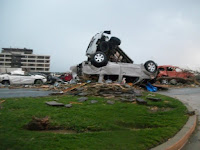 AlterNet - May 27-'11 - News audiences are seeing an increasing number of "severe weather" warnings on TV, but little connection has been made to the role humans have played in driving climate change. Details here.
Post a comment
Read more
More posts