By: Jon Gambrell, The Associated Press - 08/4/201
LAGOS, Nigeria - A region of Nigeria's oil-rich southern delta suffers widespread ecological damage as spilled oil seeps into its drinking water, destroys plants and remains in the ground for decades at a time, according to a United Nations report. Details here.
at 22:12 No comments: Links to this post

If you enjoy this blog, please consider
donating to the author to keep it going.
Just click on the link below.
Thanks! - Larry 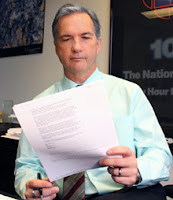 Below is a complaint I launched with the CBC Ombudsman, Kirk LaPoint (l.).  It arose from an interview on the CBC Radio program, The House. (Read "PLT" Takes Former Ambassador to Task for Bullshit Comments on the Keystone XL Pipeline") l.p.
=====
Kirk LaPoint, Ombudsman,
CBC.
Dear. Mr. LaPoint,

Please consider this a formal complaint about a program aired on "The House" on Sat. July 23rd, 2011.

In it, a former Canadian ambassador to the US, Derek Burney, strongly defended the proposed Keystone XL pipeline, which is scheduled to carry tar sands oil from Alberta, to the Texas Gulf Coast. Burney accused environmentalists opposed to the project of being "emotional" and "violent," although he was never challenged to give examples of what he meant.

It turns out,(according to Wikipedia) Mr. Burney is on the board of Trans Canada Pipelines, builders of the project. This, however, was never revealed during the interview. I consider this not only a serious lack of proper disclosure by the CBC and Mr. Burney himself, but a contravention of CBC's statement of Missions and Values with regard to the following;

a) "..correct any mistake when necessary." (I drew this matter to the CBC's attention in an email to The House, but it was never aired.)

b) "treat individuals and organizations with openness and respect..we treat them even-handedly."  (There was no follow-up, disclosing Mr. Burney's vested interest in this matter.)

c) "On issues of controversy, to ensure that divergent views are reflected respectfully."  (There was no follow-up interview with any environmental organizations in response to his accusations.)

I would ask you to use your good offices to convince the CBC, since I have failed, to make a public statement on "The House," clarifying Mr. Burny's vested interest in this matter and offering the right of response to a major environmental organization which has been directly involved in this controversy.)

Many thanks for your consideration,
Yours truly,
Larry Powell
====
Please read the happy ending at; "The House" Aplogizes Over an Interview on the Keystone Pipeline."
at 21:21 3 comments: Links to this post