By Jim Efstathiou Jr. - Bloomberg - Aug 22, 2011
Michael Mann, a Pennsylvania researcher who’s been a target of climate-change skeptics, was cleared of wrongdoing by U.S. investigators in the flap surrounding e-mails hacked from a U.K. university. Details here.
at 12:52 No comments: Links to this post

The CBC Gives Belated - but Appreciated Coverage of an Issue Critical to Canada and the World!

CBC.ca | The Current
The Keystone XL project is a proposed pipeline that would carry crude oil from Alberta to Texas. Critics call it a disaster in waiting ... saying the pipeline would pass through many environmentally sensitive areas, and there's little doubt that at some point, there would be big spill. Proponents say the line would give oil hungry Americans a safer supply of oil. And create a lot of jobs in a time where help wanted signs are desperately needed. Click headline for details. 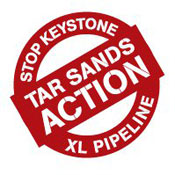 Please read update, *below.
PLT: Below is a message I sent this morning to "The Current," (with a copy to "The National.)"
=====
Dear Piya, Anna-Maria et al,

As a faithful listener and environmentalist, I want to thank you from the bottom of my heart for your coverage of the anti-pipeline protests in Washington!

To me, these are nothing less than a critical battle against the ravages of climate change. At the heart of this struggle is a Canadian project. The demonstrations and subsequent arrests therefore richly deserve more coverage from the CBC than they are getting...i.e. on "The National" along with hourly radio newscasts. There has been little or nothing of this, so far (altho I missed last night's show), much to the shame of the Corporation's news department!

If I were a conspiracy theorist, I might swear these programs are being cowed into suppressing this news by a "strong, majority, Conservative government," Hell-bent on development at any cost.

(Might this also explain the "friendly" coverage of Harper's northern junkets...where apparently nary a soul living there is concerend any longer about the fact their whole world, including the snow, ice and permafrost, is melting around them! I guess it's all good!)
Once again, my sincere and heartfelt thanks!

Larry Powell
Roblin, Manitoba.
====
*Last night (Fri.) "The National" finally got around to covering the demos in question, almost a week after they began. Did PLT play a role?
at 12:03 No comments: Links to this post