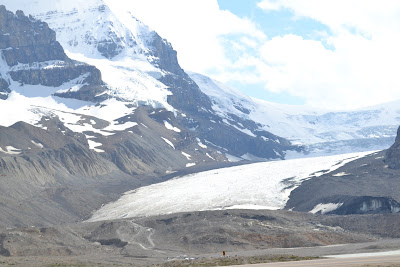 Dec '11 Alternatives - Jeff Gailus LAST JUNE , I returned to Banff National Park after a long absence. Details here. PLT: Jeff's article, which actually appeared in "Alternatives" late last year, has proven timely, if not prescient, in pointing out the chasm between the hype of Parks Canada and the reality when it come to the condition of our national parks. Now, Harper & his minions have pushed through a scandalous scheme for an icefields "lookout," involving the blasting out of the side of the mountain, once again illustrating the misplaced priority of this government to attract even more tourists rather than protect natural ecosystems.  (Those damn mountains. They do get in the way of the scenery, don't they? This photo I took of the Columbia Icefield this past summer - above - where the lookout will be built - shows just how lousy the view is without something concrete and steel to stand on! Sarcasm intended.)
Post a comment
Read more
More posts