A Rural Manitoba Municipality Makes Quiet Plans for a Sewage Lagoon - Does the Reeve Have a Conflict? 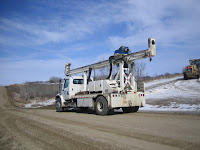 Dear Editor, I recently learned I may be getting a new "neighbour" -  a sewage lagoon.  The municipal plow prepares a way to the site for the drill truck. (l.)              The grader and truck on the site.(below)   The drilling begins. PinP photos The Rural Municipality of Shell River sent in a drill truck a week or two ago to sink holes less than a mile upwind of my retirement home in the country, north and west of Roblin. The test results will determine whether the site is suitable for such a project. Apparently, it could cost millions of dollars, especially if a liner has to be installed to prevent leakage.* Turns out, the "quarter" is owned by the Reeve, Albert Nabe. It's also within a couple of miles of some six farm homes nearby, mostly downwind as well. I was disappointed that no one from the RM council had given me a "heads-up" about this. I heard about it, instead, from a private individual at a social even
1 comment
Read more
More posts