- October 12, 2017
The Washington Post A new scientific study has found that warm ocean water is carving an enormous channel into the underside of one of the key floating ice shelves of West Antarctica, the most vulnerable sector of the enormous ice continent. Story here.
Post a comment
Read more 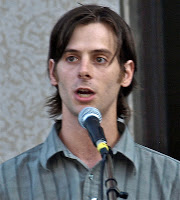 Winnipeg Free Press WINNIPEG - Green Party leader James Beddome wasn't the least bit subtle Wednesday about what he thinks of the Pallister government's red tape reduction bill. "This bill stinks!"  Beddome declared to a rally on the steps of the Manitoba legislature. "It's part of a Conservative agenda that tells us all regulation is bad," Beddome said. "Government efficiency means don't do our homework; if there's no data, there's no problem." Environmental activists led by the Wilderness Committee and Hog Watch Manitoba protested Bill 24, an omnibus bill going to public hearings sometime later this month, warning that within its reductions to regulations were changes that would allow the expansion of industrial hog barns that would further jeopardize the health of Lake Winnipeg. Speakers could not agree on  how many sets of regulations are threatened by red tape reduction - 12, 14, and 15 were all cited - bu
1 comment
Read more
More posts