Hogs and Water. A private citizen appeals to the Premier of Manitoba. 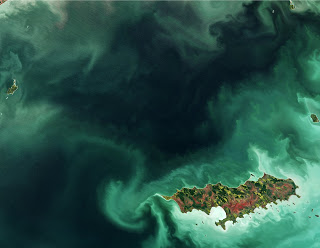 Dear Premier Brian Pallister, It’s time for you and your government to stop playing Russian Roulette with the health of our waterways.  Mr. Premier, you need to implement the “precautionary principle” and immediately stop the unbridled expansion of factory pig barns in the province. Scores of huge new barns have been going up - often in the face of opposition from nearby residents - for well over a year now, ever since your government slashed important environmental, health and safety regulations in order to make it happen.   Lake Winnipeg, transformed into the bright, blue-green hue of poisonous algae. Photo by European Space Agency. There’s already plenty of both “circumstantial,” and scientific evidence that hog waste has played a role in reducing Lake Winnipeg to a mucky mess which can be seen from space (above). Pigs have outnumbered people by the millions in our province for many years now. And that imbalance will only be widening with industry expansion. Hog
Post a comment
Read more

- August 19, 2019
(Winnipeg –August 19, 2019) Hog Watch Manitoba(HWM) is warning the public that further increase in the number of pigs raised in Manitoba could bring even greater blue-green algae blooms to Lake Winnipeg and other Manitoba lakes. This summer the extent of the algae blooms in the south basin of Lake Winnipeg is devastating to many cottage communities, including Victoria Beach, Grand Beach and Lester Beach. The current Conservative government in Manitoba has introduced several measures to try to encourage the development of more industrial size hog barns. They ended the moratorium on hog barn development which had been instituted by the former provincial government. They brought in the Red Tape Reduction Bill, removing the prohibition on winter spreading of manure from legislation. Subsequently they brought in Bill 19 which aims to limit local control over new hog barn development. HWM has requested that the government collect data to determine how much phosphorus is running off fie
Post a comment
Read more
More posts