Whether famous or obscure, Earth's wild creatures cannot hide from the hand of man. 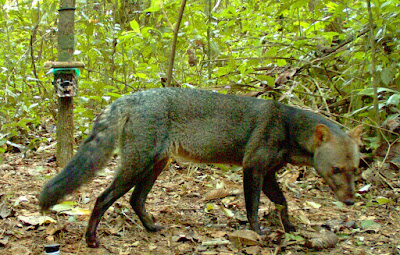 Just months ago, billions of animals, including iconic kangaroos and cuddly koalas, perished in Australia's calamitous bushfires,  found by scientists to have been worsened by manmade climate change.   Now, researchers say, one of the Amazon's least-known species could be all but gone, too in scant decades. Its habitat is being relentlessly slashed and burned to make way for agriculture.  by Larry Powell The elusive short-eared dog  ( Atelocynus microtis ) .   This rare photo was  captured  on a camera-trap,   deep in the Amazon rainforest.  Photo credit:  Guido Ayala and Rob Wallace.  Most of us know there are wild dogs living in remote places of the world. Australia's dingo probably leaps to mind first.  But did you also know that a cousin of the dingo (above) has been roaming quietly through vast areas of Amazon rainforests, in Columbia, Ecuador, Peru, Bolivia and Brazil for a long time? Atelocynus microtis -  the "short-eared" dog  is the
Post a comment
Read more
More posts