For years the biotechnology industry has trumpeted that it will feed the world, promising that its genetically engineered crops will produce higher yields. But is this true? Click here for the answer...
at April 17, 2009 No comments:

George Monbiot: on Global Warming - “It’s over, now we must adapt to what nature sends our way”

George Monbiot is Europe's leading "green" commentator. Below is his article in the UK's Guardian.
=================
Quietly in public, loudly in private, climate scientists everywhere are saying the same thing: it's over. The years in which more than 2C of global warming could have been prevented have passed, the opportunities squandered by denial and delay. On current trajectories we'll be lucky to get away with 4C. Mitigation (limiting greenhouse gas pollution) has failed; now we must adapt to what nature sends our way. If we can.Read more here....
at April 15, 2009 No comments:

How Many Will Die This Time?

More of Man's Inhumanity Toward Nature? 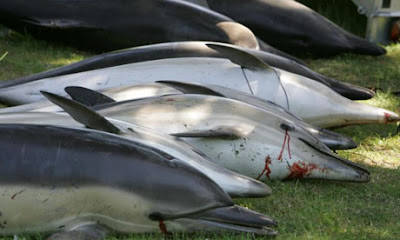 Mass strandings of dolphins and whales could be caused because the animals are rendered temporarily deaf by military sonar, experiments have shown. Read more...

This just in from Environmental Defence - The province of Ontario has introduced new legislation designed to persuade companies to reduce their use of toxic chemicals. It will be the first jurisdiction in the country to produce such a strategy. Read more....
at April 10, 2009 No comments:

Over the past several months, I have politely asked the federal Minister of Health, the Hon.Leona Aglukkaq, (r.) who is responsible for the Pest Management Regulatory Agency, at least three times to comment on the issues outlined in my article, below. She has not responded.
==================
As many of you will know, populations of honeybees have, in recent years, been tragically and "mysteriously" disappearing around the world.

I say "mysteriously" with some sarcasm, because pesticides are already known to be one of the factors. Yet, instead of removing these known toxins from the market, they continue to be allowed, while ever-more harmful ones are being approved!

Not only do the bees produce our honey, they are our most important pollinators, responsible for the production of up to one-third of the human food supply!

Despite numerous and now frantic studies into the phenomenon, which has been dubbed "Colony Collapse Disorder," nothing is being done and the bees continue to disappear.

So I'm not really optimistic for the future of these wondrous creatures.

Why? Because we have now let harmful chemicals insinuate themselves so completely into our lives, we can no longer separate reality from industry or government hype.

Beekeepers are themselves concerned about chemicals now being sprayed on crops like sunflowers, where some of their bees pollinate.

In a recent letter-to-the-editor, a government entomologist talks about "managing" insects on sunflower crops (with chemicals, of course).

It's a single word. But it speaks volumes about how completely we have now divorced ourselves from the notion of working with nature to produce our food.

We are so bogged down in the nuances of the debate; which products will kill bees "on contact" (as opposed to which ones will kill them later on, I guess), and how "target" and "non-target" insects are affected, we can no longer see the forest for the trees.

Of course these chemicals have all been sorted into these neat little compartments, each with its own label.

But, does anyone truly believe there will be no harmful synergistic effects when so many chemical soups are applied with such abandon to our food crops yearly?

Are we supposed to accept that new generations of ever-more-potent poisons, descendants of ones used in wartime to kill people and now specifically designed to kill insects, will somehow stop doing their job, say "excuse me," politely and magically step around beneficial insects and kill only the bad ones?

Give me a break!

Yet huge chemical-makers brag on their websites, without fear of contradiction, that they work "with nature," toward "sustainable" agriculture and an end to world hunger!

All the while, their products are threatening food production, not promoting it!

Their version of "sustainability" is to pour ever-larger amounts of their over-priced products onto our crops, just so our producers can "stay even" with last year!

Figures from credible sources show that, despite the chemical onslaught that has transformed agriculture since the 1930's, crops lost to pests of all kinds, have actually increased as a percentage of production!

Might there actually come a day when corporate chemical-makers, government bureaucrats, politicians and regulators, will actually face penalties if they know that certain products are harmful to human health or the environment, yet do nothing? Probably not.

But wouldn't that jam up our courts!

If you think that sounds harsh, consider that one out of every three spoons-full of food we eat, comes courtesy of honeybees!

Meanwhile, North American "regulators", armed with the certain knowledge that products already out there are "very highly toxic" to bees, not only continue to allow their use, but are approving new ones that are probably even worse!

So, on whose behalf are these "regulators" acting? Yours? Mine? Or the chemical companies and their fat bottom lines?

You be the judge.

Meanwhile, scientists and researchers continue to chase their tails, frantically trying to explain every last reason behind "Colony Collapse Disorder," a phenomenon that has been conveniently invented to impress people about how deep a mystery it is to solve.

There probably are factors other than pesticides involved, granted. But why cross every "t" and dot every "i" when they could be acting on one they already know about?

And, in fairness, there are dedicated scientists who have pointed their finger at pesticides too, yet their voices seem to get lost in the wilderness.

It's been pointed out with monotonous regularity that many bee deaths (such as some Canadian ones) do not "fit the profile" of Colony Collapse Disorder.

Gee, I guess they don't count, then! No point in even trying to do anything about those!

You can bet the chemical companies are wringing their hands in glee, knowing that, as they rack up record sales, multiple scientific studies go madly off in all directions, concluding nothing.

In a couple of radio interviews I have heard, academics put a devilishly clever "spin" on the topic. Bending over backwards not to offend the chemical companies, they conceded that "not much more" can be done using pesticides, to protect the bees (from things like mites, etc)! Heaven forbid they should even hint that they are actually a factor!

(One has to wonder just how "beholden" are their respective universities to the chemical companies because of grants they may get from them? Journalists don't ask those kinds of questions, any more.)
l.p.

Please also read "Lament for the Honeybee." Just click on the "Honeybees" category in the column to the right.
=====
Comment: Yes, we should BEE wise & admit that pesticides are the culprit.
BEE cause if we don't, we will all suffer.
JerrySatire@aol.com www.Lampoon.net
=====

Future of water is in agriculture
FAO Director-General Jacques Diouf has called for more attention to be paid to water management in agriculture and for increased support and guidance for farmers in developing countries to tackle water scarcity and the related problem of hunger. Meanwhile, the FAO has urged policy-makers to include agriculture in negotiations for a new climate change treaty to replace the 1997 Kyoto protocol.
Photo courtesty of www.treehugger.com