But it's a dry heat: Climate change and the aridification of North America 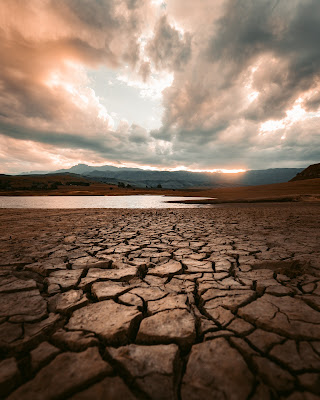 Photo by Red Charlie
Discussions of drought often centre on the lack of precipitation. But among climate scientists, the focus is shifting to include the growing role that warming temperatures are playing as potent drivers of greater aridity and drought intensification. Story here.
at May 22, 2020 1 comment:

thejournal.i.e.
IMAGINE FOR A moment that our government and others around the world had been given detailed information and warnings about the coronavirus years, even decades before it finally erupted.  Story here.

RELATED:
What could our post-pandemic world look like? It depends on you and me!

Email ThisBlogThis!Share to TwitterShare to FacebookShare to Pinterest
Labels: Floods

Letter to the Editor RE: Meat-packing sector needs oversight

Published recently in the Winnipeg Free Press.
The recent closures of meat packing plants in Alberta, Quebec and several American states due to the Covid-19 pandemic are shedding light on the tremendous expense of this style of massive meat processing operation. The expense borne by the workers at the plants is the greatest of all, their health threatened so severely, even causing death to one Cargill worker in Alberta. However the expense doesn’t stop there as consumers are expected to see meat prices jump, farmers have seen the prices paid for their animals drop by more than 30% and tax payers will ultimately pay the price to help bail out this sector.
Several decades ago when the move to close smaller slaughterhouses in favour of building huge single entity plants was happening, the rationale was that there were going to be tremendous efficiencies in doing this. National Farmers Union studies showed that the promised efficiencies of consumers seeing cheaper meat and farmers making a decent living simply did not materialize. The spread between what famers are paid for their animals and what consumers pay for meat has grown. The working conditions at the plants with thousands of animals being slaughtered each day are stressful at the best of times and downright dangerous during these times. Farmers suddenly have nowhere to sell their animals and consumers are starting to see less meat on their shelves.
Now is the time to look at how we can build a meat processing system that will not cause these massive problems. A move to build smaller, safer slaughter plants in each province would help to disperse the threats to food security. We could assure meat supply from local farms to meet local demands. If one plant was forced to close it would not disrupt the food chain across the entire country. Providing safe secure food from local farms to local consumers is entirely possible without putting meat packing workers at risk. Surely we’ve learned that bigger is not always better.

Of pandemics and politicians. (Opinion)

by Larry Powell
Politicians need to be judged, not by their words, but their actions. Ontario Premier, Doug Ford has been generally well-received for his press conferences during the pandemic. Sounding good. Saying the right things. But it was under his watch, after all, that inspections of Ontario's personal care homes were slashed to save money. And we all know how tragic and deadly the situation has become within such homes in Ontario and elsewhere. Sadly, Ford's actions are consistent with a neo-liberal agenda that has dominated the world, notably since the Reagan/Thatcher era. Cut, slash. Get governments "out of the way," Contract out. Lay off. Throw your jurisdictions "open for business" while shrinking public services like education and health. Let the market rule! (Music to the ears of the likes of Mike Harris, former Tory premier of ON. He seems to have done alright assuming the helm of one of the for-profit, private home-care companies in that province.)


Then, there's Alberta. Premier Kenney appears, in some ways, to grasp the gravity of the crisis and what's needed to counter it. Yet his government has shamelessly and heartlessly directed (no doubt at the behest of its rich, powerful and American-owned owner, Cargill) the re-opening of a big meat plant which has seen the single largest outbreak of the Covid-19 virus in North America! This is shameful and outrageous. It flies in the face of warnings from the Union there, that a re-opening would only lead to a resurgence of the pandemic, putting its members under even greater risk. Many of those members are vulnerable foreign workers, forced by economic necessity to live in crowded housing and work in dangerous, cramped condition in the plant.
It was also under Kenney's watch that an "inspection" of the plant was carried out via Skype! This, too is in keeping with neo-liberal philosophy. Its leaders view most any regulation as nothing more than "red tape" to be done away with, no matter the consequences.
(Just look at Manitoba, where a Tory regime - with positively Trumpian zeal - has done away with "pesky" rules which once kept at least a partial reign on a now-runaway, high-maintenance, costly-to-the-public-purse, cruel and polluting, "factory-style" pork industry.)
As long as we keep electing leaders who care more about political expediency and cronyism than science, nothing will change.
at May 14, 2020 No comments: