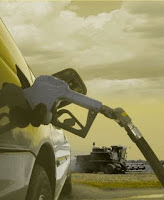 WINNIPEG. Apr.29th - '08 - The awful consequences of the biofuel craze now sweeping the planet, were starkly brought to light at a public forum at the University of Winnipeg this evening. (Car/Combine rendering courtesy of  the Government of Manitoba।)   Called "Crops, Cars and Climate Crisis," the forum featured four notable experts on the topic. They all referred to the dramatic and disastrous food price increases that are devastating the world's poor and which are being aggravated by the diversion of so much food into vehicles. One of the guest speakers was Javiera Rulli, of "Base Investigaciones" in Paraguay. She told of an assault taking place on the environment, human health and human rights of citizens of that South American country। It is all due to the transformation of the small nation to monoculture crops for the production of "biofuels" or "agrofuels" to power vehicles, rather than to feed people, she sai
Post a comment
Read more
More posts