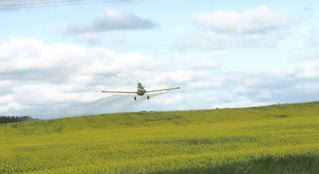 Apr. 19th, 2009 - Brandon, MB. Read related story here. The leader of the Green Party of Manitoba, James Beddome, is challenging Premier Doer to make Manitoba the first western province to ban lawn and garden chemicals. Just weeks ago, Ontario became just the second jurisdiction in the country to do away with the so-called “cosmetic” use of pesticides, long considered a health hazard, especially to children. Beddome says such a ban would do a lot to enhance the image Mr. Doer has been promoting of himself as a “green” leader. He further challenges the Premier to call on Ottawa for an immediate halt to the introduction of any further genetically-engineered crops in this country. Beddome says, contrary to industry hype, GMO crops require more, not less, pesticides to ensure their success. Meanwhile, there is mounting and credible evidence that these pesticides are harmful, both to human health and the natural environment. CONTACT: James Beddome - (204) 990-5195 Or
1 comment
Read more
More posts