Sad, sad; on the other hand, I strongly believe that Corporates are the ultimate source of the Pollution that is bestowed upon Planet Earth and Our Environment. It has tennacles that reach out to every source of money, with our Governments blessings !!

Regards,
Joe Leschyshn
at 17:05 No comments: Links to this post 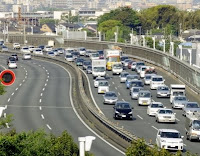 The global financial downturn has driven an auto-industry crisis that saw production and sales of passenger cars and light vehicles decline by 4 and 5 percent respectively in 2008.
Photo:Yoshikazu Tsuno/AFP
Projections suggest that both production and sales will drop even more dramatically in 2009, with 10 million fewer vehicles rolling off assembly lines than in 2007.

A new snapshot of vehicle production trends from Worldwatch Institute includes fuel economy data as well as sales data for the largest producer countries, revealing that:

· New cars made in Japan and Europe go farthest on a gallon of gas, achieving more than 40 miles per gallon on average, while Japan is planning to reach 47 mpg by 2015.

· As of 2008, only 1.5 percent of light-duty vehicles sold in the United States had a reasonably high fuel efficiency at 35 mpg, but the Obama administration has announced that it will push standards to 39 mpg for cars by 2016 and 35.5 mpg for cars and light trucks combined.

· U.S. vehicle sales in 2009, at 13.2 million, were down 3 million from 2007—the biggest drop since 1974—and are projected to decline to 10–11 million in 2009. U.S. car companies suffered heavy financial losses after betting heavily on gas-guzzling vehicles, and the fate of Chrysler and GM remains unclear. In contrast, sales in China and India will likely continue to rise.

This in-depth look at the global auto industry includes production data from 1950 to the present as well as projections through 2009.

Read the Vital Signs analysis, “Global Auto Industry in Crisis” Note: You must register to view the full analysis.

Complete trends will be available with full end-note referencing, Excel spreadsheets, and presentation-ready charts as part of our new subscription service, Vital Signs Online, slated to launch this fall.

Julia Tier
Communications Associate
Worldwatch Institute
jtier@worldwatch.org
+1 202.452.1992 x594
1776 Massachusetts Ave, NW Suite 800
Washington DC 20036 USA
www.worldwatch.org
=====
Editor's Note: Once again, Barak Obama has put Stephen Harper to shame. The best Harper could do was issue some sort of lame-brained statement via his Environment Minister that "Canada does not regulate its vehicles according to fuel efficiency, but carbon emissions!"
News Flash, Stephen! The better the fuel efficiency, the fewer the emissions!
If you are doing so well, why are carbon emissions in Canada doing nothing but go up?
My God! How embarrassing!
Rather than insisting that our car companies begin to make only energy-efficient vehicles if they want the billions of our "incentive money" he is doling out to them, Stephen has put the boots to the auto workers instead, insisting they make deep concessions in their wages.
A fat lot of good that will do for the health of our planet. In my mind, Stephen, what you have done is to simply lay bare your contempt, not only for Mother Earth but for our working people at the same time!
Nicely done, Prime Minister! - l.p.