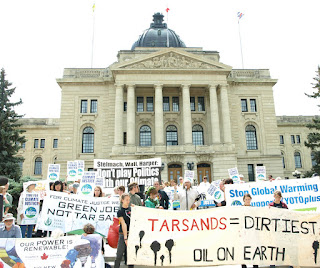 NEW ENERGY VS. TARSANDS SHOWDOWN IN REGINA Regina SK. Aug. 6 '09 - by Larry Powell Protesters from far and wide converged on Regina this week, demanding climate justice on the occasion of the Premiers' ("Council of the Federation") meeting here. Targets at the rally, in front of the Saskatchewan legislature, were this province's headlong rush to promote nuclear energy; and the Alberta tar sands, the dirtiest energy project on earth! Organizers of this and various other protests and rallies around the city during the week, included Greenpeace, the Sierra Club and Council of Canadians . "Premiers Stelmach" (above l),and "Wall," (above r) and "Prime Minister Harper," wage shameless war against Mother Earth by denying climate change and refusing to do anything about it. A First Nations activist (r) urges the crowd to demand climate justice, support indigenous rights and the closure of the tarsands! A young member of the &q
1 comment
Read more
More posts