U.S.-Based Logging Corporation Refuses an Outside Inspection of its Manitoba Wood Plant 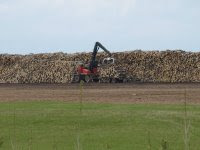 Environmentalists Cry Foul - by Larry Powell Louisiana Pacific Canada Limited operates an "Oriented Strand Board" plant in the Swan Valley of western Manitoba. It's been at odds with critics ever since the provincial government allowed it to shut down its pollution control equipment last January. Following an uproar from community members and environmentalists, the government instructed an advisory committee, the Clean Environment Commission (CEC), to review that decision. It conducted public meetings earlier this summer in Swan River. Participants argued for and against LP's application to make the shutdown permanent. Then, two groups critical of LP's proposal, joined forces. "Concerned Citizens of the Valley" and "The Boreal Forest Network" tried to arrange for scientific experts to tour the plant. They argued this was the only way for them to fully take part in the process, since the format of the public meetings
Post a comment
Read more
More posts