Have Farm Chemicals Ruined Another Life? 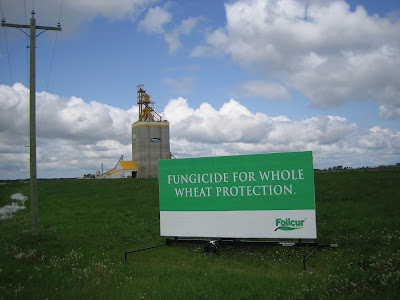 Oh look! What the world needs now! Yet another "crop protection" product! l.p.photo
I met him recently at a family event.

Since he prefers not to be identified, I'll call him "James," which is not his real name.

James moved slowly with the use of a cane; a distinguished looking senior with graying hair.

At dinner, he confided in me with bits and pieces of his personal story.
It was both amazing and tragic.

He had worked for a number of years in the farm chemical industry in western Canada.

Industry "experts" convinced him at the time that the chemicals he was working with were so safe, "I would have drunk them if they had asked me to!"

Turns out, he didn't have to.

James is convinced that, merely inhaling their fumes over the years was enough to change his life forever. And not for the better.

Later, at my request, James sends me a hand-written letter, going into more detail.

In 1960, in a small southern prairie town, he was training to become a grain elevator manager.

At that time, the chemicals he handled included 2-4-D. That's a weed killer heavily used in farming all over the world for more than half a century. Various studies have linked it to a wide range of adverse human health effects.

It is related chemically to Agent Orange, widely used by the US military against the enemy in Viet Nam.

James says, at the time, there was no storage space for the chemicals so they were kept in his office, where he breathed in their fumes.

Later, at another location and another job in the same province, he went to work spraying roadsides, using products he says "Were hard to get for the average home owner."

He then moved to another area of the province where many different crops were grown. There, he says, a surprising number of new chemicals, including bug-killers and fungicides, were "big sellers."

He describes fumes from the huge chemical warehouse at that location as "almost putrid." And there, he says, he actually lost his sense of smell.

In 1991, he was gripped with full-bodied seizures and tremors.  He was forced to retire and lost his driver's license, which he has never gotten back.

The Medical Establishment Turns its Back

Several visits to a big city hospital turned up nothing.  Finally, a full medical team of specialists "Grilled me for six hours."  He gave them a list of every chemical he had ever handled, sold or otherwise come into contact with and the companies which sold them to him.

Then, they dropped a bombshell on him.
He says the team asked "'What would you do if we told you it was definitely the chemicals which caused your medical problems?' I explained it would be very nice to receive workers' compensation for this.

They put their heads together and, after a short conference, they asked if I would go after the chemical company responsible. My answer was 'yes.'

They then informed me that, if litigation ever took place, they would not help me! This was a real slap in the kisser as this was totally unexpected."

James says his motor skills have been damaged and walking is a real effort. He says his memory has also been damaged. He says people who obviously know him say "hello," but he has no idea who they are.

He gets bad tremors daily, although medication keeps them under control.

James has chosen not to let us use his real name, publicly. He says he lives "quite comfortably now," considering all his ailments. So he says he just doesn't want to stir up a public "hornet's nest" this late in life. 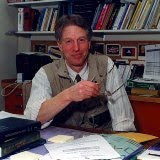 Meanwhile, a veteran medical ethicist at the University of Manitoba, Paul Schafer, says he has never heard a story exactly like this one. But he has heard similar ones.
Prof. Schafer, Director
of the U of M's Centre for
Professional and Applied Ethics.
Prof. Schafer concludes, "Doctors (and even public health officials) who blow the whistle on industries or industrial chemicals often find themselves embroiled in controversy, which can be career-damaging. Some are brave and speak out; many are cowardly and shut up."
-30-
Author's note: This tragic tale is not inconsistent with others I have heard. Given the unwillingness of much of the medical establishment and sometimes our larger society to "take on," these giant corporations, the companies basically carry on with business as usual, unchallenged and unchecked.
One farmer I spoke to a few years ago told me his family had been exposed to a stiff dose of chemicals from a nearby farm where crop spray was being applied from the air. He and his family had all gotten sick and he was convinced the spray was the reason.
A tidbit he did not want me to report on at the time was this.
He believed a medical doctor employed by the corporation which made the spray, had actually 'phoned his own family doctor. Why? To convince him their spray was not really the cause. It seemed to work. His doctor, who initially said he believed the spray was to blame, changed his mind.
Then, there was the time I was kicked out of a veterinary clinic. I wanted to confirm with the vet, anecdotal stories I had heard that several dogs and cats were dying in an area where crops were being heavily sprayed. It was a hostile reception which surprised me a bit and made me feel like asking "Doth thou not protesteth too much?"  l.p.
====
Read related story here.
Email Post
Labels: Health