Showing posts from February 1, 2010
Show All 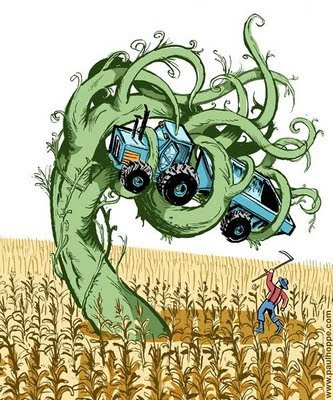 ISIS Press Release 01/02/10 Major crops genetically modified for just two traits - herbicide tolerance and insect resistance – are ravaged by super weeds and secondary pests in the heartland of GMOs as farmers fight a losing battle with more of the same; a fundamental shift to organic farming practices may be the only salvation Dr. Mae-Wan Ho Please circulate widely, keeping all links unchanged, and submit to your government representatives demanding an end to GM crops and support for non-GM organic agriculture Artist Paul Hoppe Two traits account for practically all the genetically-modified (GM) crops grown in the world today: herbicide-tolerance (HT) due to glyphosate-insensitive form of the gene coding for the enzyme targeted by the herbicide, 5-enolpyruvylshikimate-3-phosphate synthase (EPSPS), derived from soil bacterium Agrobacterium tumefaciens, and insect-resistance due to one or more toxin genes derived from the soil bacterium Bt (Bacil
Post a comment
Read more

Biotech Crops Cause Big Jump in Pesticide Use: Report

Posted: 15 Nov 2009 09:58 PM PST Report Calls for Global Climate Talks to Consider Boreal’s Impact OTTAWA, Ontario—When the world thinks of forests and their value to offset global warming, tropical forests come to mind. A report released today shows that the global impact of Canada’s boreal forest, which stores nearly twice as much carbon per hectare as tropical forests, has been vastly underestimated. “The Carbon the World Forgot” identifies the boreal forests of North America as not only the cornerstone habitat for key mammal species, but one of the most significant carbon stores in the world, the equivalent of 26 years of global emissions from burning fossil fuels, based on 2006 emissions levels. Globally, these forests store 22 percent of all carbon on the earth’s land surface. “Past accounting greatly underestimated the amount and depth of carbon stored in and under the boreal forest,” said Jeff Wells, an author of the report. In addition to carbon storage i
Post a comment
Read more
More posts