Showing posts from February 3, 2010
Show All 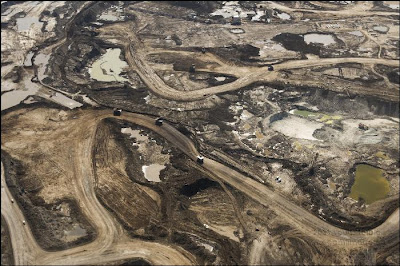 While composing my story, "Standing the Precautionary Principle on its Head; the Manitoba Government celebrated '09 by allowing industrial pollutants to be released in the Swan Valley," Gov't. of MB photo I invited three Manitoba cabinet ministers to give their input. Just over a month later, I got a response from one of them, Bill Blaikie. Please read my email and his, below. Larry ========== From: Larry Powell [mailto:earthkeeperfarm@yahoo.ca] Sent: Thursday, December 31, 2009 12:22 PM To: Conservation, Minister; Agriculture, Minister; Finance, Minister  Subject: News Story On LP's Pollution Controls Dear Honourable Ministers,   I'd like to congratulate you all on your recent appointments to new portfolios!  I am a journalist based near Roblin who writes regularly on issues touching on your areas of ministerial responsibility. (I write for my blog - see link below - occasionally for weekly newspapers in my region and magazines such as Briarpatch and Sasq
Post a comment
Read more