Farming summit told of delaying tactics by large agri-business and food producers on decisions that would improve human health and the environment
(AP Photo/Robert
F. Bukaty, File)
at September 22, 2010 No comments: Links to this post


Record rainfall and a disastrously wet season have already ruined millions of hectares of grain crops on the Canadian prairies this year. 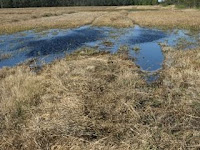 Now, another scourge, also related to excess moisture, has emerged.


Widespread reports from vegetable gardeners tell of crops ruined by the blight, which is a highly-contagious pathogen. It can linger in the soil and even spread in the wind. 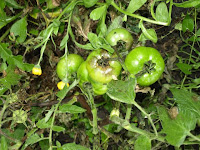 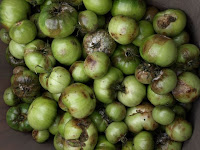 My wife & I lost our entire tomato crop this summer. l.p.

Mandy Lewick of Manitoba Agriculture, Food and Rural Initiatives (MAFRI) in Roblin, says wet weather, such as we have experienced this year, provides the kind of conditions the disease needs to thrive.

But, he adds, “Anecdotally it has been reported in most all areas of the province where tomatoes are grown.

"These include tomato and potato gardens in the western, south central, interlake and eastern regions along with the city of Winnipeg."

(Other crops, like eggplant, can also be affected by late blight.)

It is too early to put a number on the losses. But they are obviously considerable.

There are no effective control measures available for late blight if it is confirmed in an organic crop.

A government advisory notes, “The disease affects all living tissue of susceptible plants, meaning all foliage as well as the potato tubers and tomatoes themselves are equally susceptible to infection. If the disease is confirmed in an organic field, destroying the crop is unfortunately the only way to prevent the disease from spreading."

Watch a video on this topic here.
More information on late blight can be found here.

Meanwhile, Gonsalves suggests we should be prepared for more of the same in the future. He adds, "Bottom line is that, if late blight is around in 2011, and the conditions are as good for it to thrive as they have been in most of 2010, the odds are that late blight will show up again in 2011."

Earlier this year, there were other reports of "early blight" in tomatoes, believed to have originated in seedlings from some major greenhouses. There has also been reference to tomato seedlings as the source of this recent "late blight" outbreak. In our own case, however, all of our tomatoes were started under lights, indoors, from seed only. As a layman, then, I can only assume the offending spores were carried into our garden on the wind.

So What's With the Reference to Climate Change?

Don't misunderstand. That is my reference and mine alone. As usual, no one in authority (including the media) is prepared to deal with this "elephant in the room" by uttering the term, even tho their mouths, as one might say, must be full of it!

As masses of evidence pile up around the globe of increasing incidents of catastrophic floods, droughts and hurricanes, (i.e. "extreme weather events") authorities continue to respond with weasle-words (i.e. "Sure is 'wacky weather' we're having!") or just a stony silence.

To do otherwise, I guess, would be to acknowledge that you, I and they are to blame. Climate change, after all, is caused by humans. So, if we are all contributing to it through our wasteful, gas-guzzling lifestyles, (as uncaring or downright negligent individuals, industries, governments and organizations), then such an admission would carry with it a commitment to actually do something about it!

And we can't have that, can we?

Meanwhile, masses of people, perhaps now the majority in North America, armed only with their coffee-shop wisdom, continue to think they are smarter than the planet's best climate scientists and deny or ignore the problem even as the evidence of its consequences piles up around us! l.p.

Larry, so nice to hear someone say what MUST be said and never is. (I personally am pretty good at busting up social events and "spoiling everyone's fun" by pointing out our complicity in ruined gardens here, burning forests there, torrential floods somewhere else. I've noticed I'm hardly invited out anymore. . .)
Do you subscribe to George Monbiot's columns by any chance? He's fighting the good fight like you but it has lately occurred to me that reason and facts will never prevail over the paralysis people seem to be experiencing now. We all know on a gut level things are changing fast, for the worse, and I think we are genuinely scared. But instead of rising up en mass and saying enough already, we are cowed and then manipulated by politicians and their media who love us in such weakened state. Trouble is, when we're weak, we're sitting ducks for fascism and hatemongering. What will it take to make large numbers of us stand up and demand change? This is what I'm asking my kids and their friends and the young people from Europe who have volunteered on my farm all summer (wwoofers). What is it going to take to make us rise up. Hunger? By then it truly will be too late.
Thanks for your work, Larry.
Your fan,
N.H.