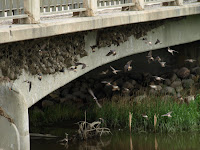 Mark Kniver | BBC News | September 25, 2010 Birds embarking on long distance migrations are more vulnerable to shifts in the climate than ones making shorter journeys, a study suggests. Barn swallows nest under a bridge in southern Manitoba. Might they be afffected, too? Scientists say the increasingly early arrival of spring at breeding sites in Europe makes it harder for the birds to attract a mate or find food. The researchers warn that the "increasing ecological mismatch" can lead to a decline in bird populations. The findings appear in the journal Proceedings B of the Royal Society. Cape May warbler, observed in southern MB, 2008 l.p. photos "The study was based on a very large dataset of 117 migratory bird species that migrate from Africa or southern Europ
Post a comment
Read more 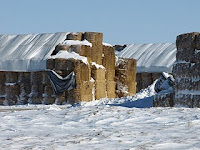